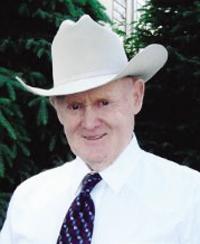 David John Winzer, born October 5, 1925 to Henry and Minnie Winzer in the town of Dulverton, England, with his family at his side passed peacefully in the Cypress Regional Hospital in Swift Current, Sask. on October 2, 2014.
He was raised and schooled in England, enjoyed all the activities and sports that most young men experience. David participated in the traditional fox hunt, toured the countryside on his Norton motorcycle, excelled in the game of soccer, and listening to some of his childhood tales smoked in the bushes until he burnt down the front yard tree – which probably wasn’t his only boyhood stunt.
In the years when England was in mortal danger, David J. Winzer served from the 17th of May until the 31st of December, 1944 and gave generously of his time and powers to make himself ready for his country’s defense.
We all recognize what a brave man he was, willing to give his life for his country and when that was no longer required of him, in 1946 he boarded the Aquitania and set sail for a land unknown to him. With plans to work  with his Uncle Harold Winzer, his Canadian voyage began.
He met Irene Biederman at the Murraydale Stampede and subsequently they were married on November 22, 1951. They lived on the Harold Winzer Ranch for a month while waiting for the arrival of their tickets to England for their honeymoon, returning to Canada in April of 1952. Upon their return, what was to be his dream had vanished and David found himself working for Art Kusler for a short time until news of job opportunity arose on the Roy Stewart Ranch south of Maple Creek. With no hesitation they moved and worked there for 8 1/2 years. In that time, children Clarene (born in 1953) and Colin (born in 1955), were raised on the ranch.
In 1959, the opportunity of purchasing Irene’s parents’ homestead sent Dave in a new direction, north of Maple Creek, where Heather was born in 1959, Shirley in 1961, and Keith in 1966, making the family complete.
Dave enjoyed his ranch life, helping neighbours whenever possible, and using his knowledge of cattle he began working for Jerry and Carol Swanson at the Maple Creek Auction Ring.
Choosing to retire in 1987, he purchased a home in Maple Creek where he was fortunate enough to reside until his passing.
Dave is survived by his twin sister Hazel, who still resides in England, as well as his children: Clarene (Barry) Wheeler, Colin (Doreen) Winzer, Heather (Danny) Udal, Shirley (Bruce) Sharp, Keith (Anita) Winzer; as well as grandchildren Tanya (Scott) Pickard and their children Ethan, Tate and Taryn; Jason (Michelle) Wheeler and children Madison, Chloe, Jhett and Blaze; David Winzer, Ashlie Winzer, Shane (Terri) Fournier and their children Jordan and Brooklyn, Dustin Fournier, Amy Gordon and her children Cassidy and Cruz, Chelsey (Cody) Thomson and children Brana and Walker, Brittany Udal, Shelton Udal, Jessica (Steve) Kirby, Amber (Tyler) Steinkey and children Lincoln and Koa, Trent Winzer, Dayna Winzer. Dave is also survived by many nieces and nephews. He is predeceased by his father Henry, mother Minnie, brother Edgar, sisters Vera and Margaret, and his beloved wife Irene.
In closing here is a verse written by Rick Church which summarizes what we think Dad would say:
“It’s not the end of the trail for me;
I’ve just traveled on,
you see;
Up ahead where greener pastures grow and cool water streams dance
as they flow.
Flowers in bloom of
every sort and kind,
colours more vivid than any I left behind,
family and friends
I haven’t seen in years,
hugs and handshakes
and no more tears.
They’ve welcomed me home here today,
a place of peace for
me to stay,
they say it’s home for eternity;
No it’s not the end of the trail for me.”
The funeral service was held at the Maple Creek United Church on Wed., Oct. 8 at 2:00 p.m. with Rev. Eva Stanley officiating. The eulogy was given by grandson David Winzer and a tribute by Heather Udal. A private family interment will take place in the Maple Creek Cemetery. Pallbearers were David’s family. Honorary pallbearers were all of David’s grandchildren and great-grandchildren.
Those who wish may remember David with a donation to the Southwest Health Care Trust.
To email an expression of sympathy you may visitwww.gonebutnotforgotten.ca.
Binkley’s Funeral Service, Maple Creek and Leader, in charge of arrangements, 306-662-2292.

Leave a Condolence for Carol Swanson