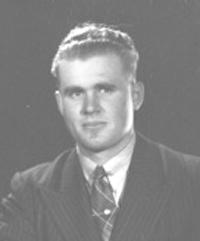 George B. Sommerstad of Medicine Hat, beloved husband of Florence Sommerstad, passed away on Tuesday, November 25th, 2014 at the age of 91 years. George also leaves to cherish his memory his two sons, Donald of Red Deer and David (Donna) of Medicine Hat; four grandchildren, Shauna (Greg) Murray and their children, Ashlee and Cody, Steven (Jessica), Sara (Devin) Stenhouse and their children, Jada and Abby, and Peter (Kim Gazdag); one brother, Clarence (Rose); one sister-in-law, Dell Sommerstad; as well as numerous nieces and nephews. George was predeceased by his parents, Ole Sommerstad and Mildred Sandeman; one daughter-in-law, Brenda Campbell; and one brother, Harold. George worked in the oilfields near Leduc in the 1940\’s and later moved to Medicine Hat. He was employed by the City of Medicine Hat as Gas Superintendent until retiring in 1987. George was a lifetime member of the Oilman\’s Club. He loved curling and golfing (at age 90 he golfed his age). George spent many winters in Arizona. He will be greatly missed by his family and friends. The Funeral Service will be held at SAAMIS MEMORIAL FUNERAL CHAPEL, 1 Dunmore Road SE, on Saturday, November 29th, 2014 at 10:00 a.m. with Gary W. Goran officiating. Interment will take place at a later date at Hillside Cemetery. Memorial gifts in George\’s memory may be made to Canadian Diabetes Association, #102, 73 – 7th Street SE, Medicine Hat, Alberta, T1A 1J2. Condolences may be sent through www.saamis.com or to condolences@saamis.com subject heading George Sommerstad. Radio funeral announcement can be heard on Friday around 11:35 a.m. on 93.7 Praise FM. Funeral arrangements are entrusted to SAAMIS MEMORIAL FUNERAL CHAPEL CREMATORIUM & RECEPTION CENTRE, \”The Chapel in the Park\”, locally owned and directed. Should you wish any additional information, please telephone (403)528-2599