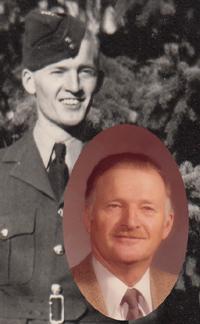 Edward Everest (Ev) Johnson, 94, passed away December 26, 2014 at Legacy Lodge in Lethbridge, AB. He was born on September 23,1920 in Enchant, AB to parents Warren and Harriet Johnson. He married Imogene Batty on February 4, 1947 in Calgary, AB.
He is survived by his two sons, Lynn (Gayle) Johnson, Blair (Ginny) Johnson, daughter Robyn Humphrey, five grandchildren: Carrie, Jamie, Season, Lani, Drew, and five great grandchildren.
He is predeceased by his parents Warren and Harriet Johnson, loving wife Imogene, and siblings Marion (Les) York, Melvin (Jean) Johnson, Allen (Ruby) Johnson, Edna (Ted) Kurtz, and Mildred(Ralph) Byrne.
Ev was in the RCAF from 1940-1949 where he was a flight engineer and obtained a commission. He retired from the Air Force and purchased farmland adjacent to Picture Butte, AB. where he farmed until 1956. He bought the family homestead three miles out of town and was there until 1969. He enjoyed his days in Picture Butte and had many good friends there.
From 1968-1969 Ev completed his Auto Body Mechanic Ticket at \’Bullocks Auto Body\’ in Lethbridge, AB. He greatly enjoyed working for the Bullocks and they dubbed him “The Bishop”; even painting it on his tool box.
In 1969 Ev attended the U of A on a bursary from Medicine Hat Technical High School and obtained his teaching certificate.
From 1970 to 1984 Ev taught at the Medicine Hat Vocational High School. During the summers he worked on his Bachelor of Arts at the U of A and completed that by 1976.
In 1984 Ev retired and he and Imogene moved to Lethbridge. During his lifetime Ev enjoyed many things such as photography, history, coin/stamp collecting, walking/hiking, archery, and woodworking. Ev was known to make beautiful wood replicas of train sets and antique cars. He loved to read biographies and books about science. His favourite pastime was wandering the coulees looking for rocks and artifacts.
Ev will be fondly remembered for his great sense of humour and his catch phrase “Never get excited”.
The family would like to thank the staff at Legacy Lodge for looking after him in his final years.
At Ev’s request, no service will be held.
condolences@generationsfh.ca
Christensen Salmon Generations Funeral Home, Lethbridge
1-800-561-9833

One Condolence for “JOHNSON, EDWARD EVEREST”