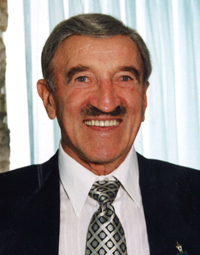 Reinhold “Reiny” Lehr of Medicine Hat, beloved husband of Jean Lehr, passed away on Saturday, March 7th, 2015 at the age of 95 years. Reiny also leaves to cherish his memory four children: Ken (Anne) and their children, James Lehr and Gina (Scott) Pahl; Darlene (Edgar) Stricker and their children, Sasha Stricker (Mark Kennedy) and Tara-Lee Stricker- Woodhouse; Randy (Linda) and their children, Scott (Mandy) and Craig (Nicole); and Dale (Marci Stickel) and his daughter, Jenna Lehr (Brendan Lee); one daughter-in-law, Nancy Lehr and her children, Leeanne (Theo) Van der Burgt and Laura-Jeanne McNeil (Brian Stollery); and sixteen great-grandchildren. Reiny was predeceased by his first wife, Esther; his second wife, Lois; his parents, Reinhold and Bertha; one son, Gary in March 2003; one grandson-in-law, Woody Woodhouse; and all of his brothers and sisters.

Reiny was born on September 14th, 1919 south of Walsh in the Graburn Gap area. Over the next few years he and his family moved a couple of times to different farms in the area before settling down on a dairy farm located near the current Northlands Co-op site. As a young man Reiny delivered milk door to door to Medicine Hat residents by horse and wagon. The sandy soil on the farm lent itself to the growing of watermelons. During watermelon season Reiny sold them all around the area from the back of a truck. In 1946 Reiny and his brother, Reuben purchased Lehrs Dairy from their Dad and operated it until 1952. During his younger days Reiny and his friends spent many hours riding horses on the then wide open prairie to the north. Those many hours spent on the back of a horse under blue Alberta skies helped to cement in Reiny the dream he had had since he was a small boy of one day owning a ranch. That dream began the long hard road to fulfillment in 1951. After courting and marrying a young lady he met at a dance by the name of Esther Flaig, Reiny reached the conclusion that he could not be married, as he put it “to both dairy cows and a wife” so he decided to divorce the dairy cows, step out on his own and begin to fulfill that dream of owning a ranch. In 1951 he purchased what is to this day the home place for the family ranch along the banks of the South Saskatchewan River near Medicine Hat. Those first few years were tough. The “ranch” at that time consisted of a few acres of land, a handful of cows, pigs and chickens and a little 8N Ford tractor. Reiny and Esther along with children Gary, Ken and Darlene made the move with a vision, determination and a whole lot of debt. As the family grew with the addition of Randy and Dale so did the ranch. Through hard work, the smarts to know good risks from bad and sheer determination Reiny began to grow and expand his ranching dream. As sons and then grandsons became partners with Reiny, the ranch, now known as Short Grass Ranches Ltd, continued to grow and diversify. Reiny continued riding and chasing cows on the ranch until he was 89 years old. By his ninetieth year he found it a little tough getting up on a horse so he traded in four legs for four wheels and continued helping out on his quad until he was 91.

Reiny was a firm believer in community involvement and was never afraid to step up and take on a leadership role in the many organizations he was involved with. He helped organize and chaired the Medicine Hat Milk Producers, was an active member of the Farmers Union of Alberta, helped with construction of the Clearwater Community Hall, was a long time 4-H parent and leader, worked with fellow producers to construct what at the time was known as the 11-22 Co-op Seed Cleaning plant, was a member and President of the Medicine Hat and District Chamber of Commerce and served as Chair of the Alberta Chamber and has been a long time member of the local Shrine club. In 1975 he was appointed to the Grain Handling and Transportation Commission, known as the Hall Commission, which studied, reported on and made recommendations to the Federal Government of the day on needed changes to the western grain handling system. Reiny was one of a group of Medicine Hat visionaries who put in sweat equity and cash to restore and help turn the old Medalta Pottery property into the world class historical site it is today.

Despite accomplishing all of the above, Reiny found plenty of time for family and fun. In their 57 years of marriage Reiny and Esther attended parties and dances on a regular basis. Many a good time was had at Clearwater Hall dances. Reiny and Esther, along with their good friends, Gene and Ruth Eaton, resurrected the old pioneer barn dance tradition by cleaning out and fixing up the loft of a barn on the ranch. For several years they hosted an annual barn dance that featured live western dance music and a lot of fun. During those years Reiny and Esther purchased a 5th wheel trailer and spent many summer vacations travelling with their friends. The warm winds of Hawaii also beckoned so they purchased a few weeks of time share in Hawaii and travelled there every winter for over 30 years. After Esther’s passing, Reiny, as he did with any other misfortune in his life, soldiered on. He renewed acquaintances with an old friend, Lois Brosch, and they married. Tragedy struck again with Lois’ passing 2 years later. Reiny then fortunately met Jean Keast, a widower from Illinois, in Hawaii through a chance conversation about John Deere tractors. They later married and have spent the last 10 years travelling and enjoying each other’s company. Reiny always enjoyed the rather large Lehr family gatherings. As the family grew, holiday and birthday gatherings could reach 30 people or more. It was always evident on Reiny’s face that he enjoyed being with the grandchildren and great grandchildren.

Reiny walked the walk and talked the talk. The importance of family, the value of hard work, the value of a hard earned dollar, loyalty to those who had earned his trust and the value of honesty and integrity in how you live every day of your life, were all core to Reiny’s nature. He lived by and practiced these values every day of his life. Reiny will be sadly missed and fondly remembered by his family and many friends.

The Funeral Service will be held at MEDALTA POTTERIES, 713 Medalta Avenue SE, on Friday, March 13th, 2015 at 1:30 p.m. with Pastor Jeff Decelle and Diaconal Minister Lila deWaal co-officiating. Memorial gifts in Reiny’s memory may be made to the Friends of Medalta Society, 713 Medalta Avenue SE, Medicine Hat, Alberta, T1A 3K9 or to the Shriner’s Hospitals for Children, 1529 Cedar Avenue, Montreal, Quebec, H3G 1A6. Condolences may be sent through www.saamis.com or to condolences@saamis.com subject heading Reiny Lehr. Funeral arrangements are entrusted to