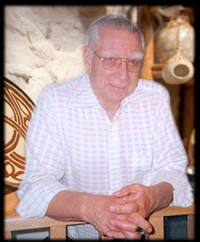 Mr. Basil Peter Leismeister, beloved husband of Mrs. Leona Leismeister, passed away at the Medicine Hat Regional Hospital on Sunday, March 8, 2015, at the age of 81 years. Basil was born in the Senate District of Saskatchewan on November 14, 1933. He moved to Medicine Hat in 1950 where he worked at Medalta Potteries until 1967. At this time he was hired on to work for the City of Medicine Hat in the Water & Sewer department, working there until his retirement as Supervisor in 1996. During his retirement, Basil enjoyed working as a potter at Medalta creating many fine works with clay. Along with two other potters, he was invited to the Smithsonian Museum in Washington, DC for a two week period, as an artist in residence to demonstrate and teach the art of potting. The design and creation of his clay bowls earned Basil the distinction from the Smithsonian to permanently display his bowls in the museum as an International artist from Alberta, Canada. This was something he was very proud of and talked about whenever the opportunity arose. Basil was a dedicated and faithful member of St. Patrick’s Catholic Church, volunteered in many capacities and was a member of the Knights of Columbus. His memory will be forever treasured in the hearts of his wife, Leona; daughters, Melanie (Doug) McCaffry, Sandra Leismeister and a very special buddy, Karen Janecke; two granddaughters, Tracy Zizek and Carrie (Ken) Barrett; great-granddaughter, Sophie and great-grandson, Grayson; three sisters, Tillie Schafer, Loraine (Rob) Woolley, Kathleen (Clem) Kuntz; brother, Frank (Evelyn) Leismeister; two sisters-in-law, Minnie (Manuel) Houff and Violet Houff as well as numerous nieces and nephews. Basil was predeceased by his parents, Jack and Dorothy Leismeister; brother, Jack (Carol) Leismeister; In-laws, Otto and Olga Sieppert; sisters-in-law, Jean (Gordon) Vaughan, Arylene (Alfred) Schimpf and brother-in-law, John Houff. Those wishing to pay their respects may do so starting one hour prior to Vigil Prayers which will be recited at Cook Southland Funeral Chapel, 901 – 13 Street S.W., Medicine Hat on Thursday, March 12, 2015, at 7:00 p.m. The Funeral Mass will be celebrated at St. Patrick’s Roman Catholic Church, 238 – 2 Avenue N.E., Medicine Hat, on Friday, March 13, 2015, at 1:00 p.m. with Reverend Father John L. Maes Celebrant. Interment will follow at Hillside Cemetery. (Condolences may be expressed by visiting www.cooksouthland.com) Memorial donations in Basil’s name may be made directly to the Canadian Amyloidosis Support Network Inc., 1119 – 4005 Bayview Avenue, Toronto, Ontario, M2M 3Z9. Honoured to serve the family is COOK SOUTHLAND Funeral Chapel, 901 – 13 Street S.W., Medicine Hat, Alberta T1A 4V4 Phone 403-527-6455

Leave a Condolence for Margo Miller