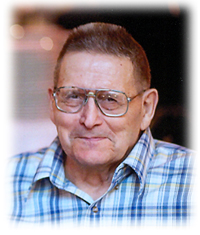 Mr. Walter Cecil Bice, beloved husband of Eleanor, passed away peacefully at the Medicine Hat Regional Hospital on Monday, March 16, 2015, at the age of 87 years. Walter was born March 5, 1928, on a farm in the Codesa area (Fox Creek) of Alberta. On December 18, 1950, he married his loving wife, Eleanor and they have shared sixty four wonderful years of marriage. On their 40th anniversary, Walter and Eleanor proclaimed their love for each other by renewing their vows. Growing up on the farm instilled a hard work ethic in Walter that made him successful in all of his life’s work. Over the years he was involved in farming, working the rigs, carpentry and lastly, drywall. Walter shared his knowledge and skill by teaching his sons, along with others, how to drywall and always demonstrated a good work ethic that was adopted by those he worked with. He was always proud of the job he left behind! In spare time he liked to watch hockey, curling, football and baseball on TV. He also liked the outdoors and was an avid big game hunter. For many years he played pool in the Men’s Pool League and even competed in the North American 8 Ball Championship tournament in Las Vegas. Most of all, Walter was a good family man, as his family meant everything to him. His sense of humour and presence will be deeply missed by his loving wife, Eleanor; children, Mary (Ken) Bakaluk, Dianne Michaud, Harold (Cindy) Bice, Hugh (Patty) Bice, Harvey Bice (Jennifer Cana) and Gloria Prince (Kevin Funk); 18 grandchildren, 23 great-grandchildren and three great-great-grandchildren; a sister, Lila Leach; brother-in-law and sister-in-law as well as numerous nieces and nephews. He was predeceased by his parents; a daughter, Ann and several brothers and sisters. A Celebration of Walter’s life will be held at Cook Southland Funeral Chapel, 901 – 13 Street S.W., Medicine Hat on Friday, March 20, 2015, at 2:00 p.m. with Life Celebrant Gerry Getz officiating. A time of fellowship will follow thereafter in the Cook Southland Reception Facility. (Condolences may be expressed by visiting www.cooksouthland.com) Memorial donations in Walter’s name may be made directly to the Heart and Stroke Foundation of Alberta, 124, 430 – 6th Ave. S.E., Medicine Hat, Alberta, T1A 2S8. Honoured to serve the family is COOK SOUTHLAND Funeral Chapel, 901 – 13 Street S.W., Medicine Hat, Alberta T1A 4V4 Phone 403-527-6455.

One Condolence for “WALTER CECIL BICE”

Leave a Condolence for John and Heather Gold