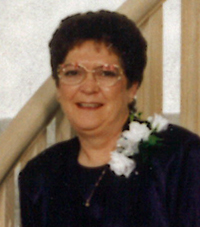 Phyllis Ruth Manz beloved wife of Barry Manz of Richmound, Saskatchewan passed away on Saturday, March 14th, 2015 at the age of 72. Phyllis also leaves to cherish her memory her two sons, Ricky (Shauna) and Cory (Laurie) both of Medicine Hat; five grandchildren, Brandon, Shylo, and Trinity Manz and Mcayla and Ryley Manz; one brother, Les McNaughton; three sisters, Bernice (Harry) Einarson, Gail (Jerry) Bordian, and Lori (Chris) Warriner; as well as numerous nieces and nephews. Phyllis was predeceased by her parents, Abner and Irene McNaughton; and one sister, Marge Tycholiz. Phyllis was born on August 5th, 1942 in Dauphin, Manitoba. Barry & Phyllis were married in 1969 in Brandon, MB. They had two children they raised in Medicine Hat, AB and Richmound, SK where their love blossomed for their 45 years of marriage. A great accomplishment and one they were proud of. The majority of their married life together was spent as the owners of the Richmound Hotel. Over the years they travelled to many counties on vacation, enjoyed numerous camping and road trips. Her heart was truly happy being with family and friends. Phyllis “Diller” was one of a kind. Her witty comments, jokes and the odd teasing always brought a laugh. Phyllis was a special person who could connect with anyone at any age. This was true of her many friends and the bond they shared with each other. Diller’s one big passion was playing cards with the “Card Girls” and anyone who wanted to lose some money. Phyllis loved her special fury friend Taz and enjoyed doing puzzles, crosswords and working in the garden. She was very proud of her Grandchildren and couldn’t wait for them to visit. The Funeral Service will be held at Saamis Memorial Funeral Chapel, 1 Dunmore Road S.E., on Friday, March 27th, 2015, at 2:00 p.m. with Gary W. Goran officiating. Memorial gifts in Phyllis’s memory may be made to Alberta Heart and Stroke Foundation, 124, 430 – 6th Avenue SE, Medicine Hat, Alberta, T1A 2S8, or to the Alberta Lung Association, Alberta/NWT Division, P.O. Box 4700, Station South, Edmonton, Alberta, T6E 9Z9. Condolences may be sent through www.saamis.com or to condolences@saamis.com subject heading Phyllis Manz. Funeral arrangements are entrusted to