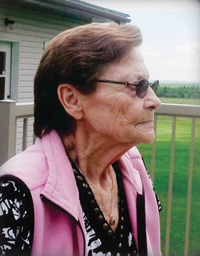 Muriel Peters passed away in Medicine Hat April 2, 2015 t the age of 83 years with her loving family at her side.

Muriel was born to Howard and Martha Ellis on April 14, 1931, in Gull Lake Sask. She grew up on a farm West of Verlo, SK. Muriel went to High School in Gull Lake where she lived with her paternal grandmother Grandma Curry. She moved to Calgary in 1949 where she worked at the downtown CIBC as a teller. Within a year she was fast tracked to current accounts due to her work ethic . She worked at Okotoks, AB on weekends as well as at the Gun Range.

Muriel married Fred Peters, with whom she had been long-time friends and from the Verlo area as well, when he came to Calgary and proposed in 1950. They came back to Saskatchewan in 1952 to purchase a farm South of Carmichael up on the Bench. Muriel continued to farm after Fred passed away in February 1968 until Spring of 1981 when she sold the Farm to retire and move to Medicine Hat where she purchased a house in 1982 overlooking the coulees in East Glen Place that reminded her of her beloved prairie hills. As well as being an avid golfer; Muriel with 2 Holes in Ones to her credit as well as numerous Tournament Trophies, she was a member of The Red Hat Bachelorettes and Medicine Hat Legion Auxiliary.

A Graveside Ceremony for Muriel was held April 6, 2015 at the Gull Lake Cemetery where she was buried alongside her loving husband Fred.

The Family would like to thank the Staff at the Medicine Hat Hospital; particularly on the 4th and the 6th floors. If friends so desire, donations can be made in Loving Memory of Muriel to the Alzheimer’s Society or Cancer Society.

Leave a Condolence for Pat Hannay