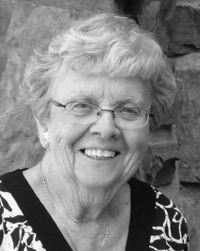 On Friday, April 10, 2015, Helen Holizki, passed away peacefully at Foothills Medical Center, Calgary at the age of 88 years. Helen was born on August 16, 1926 to John and Mary Dennehy who immigrated to Canada from County Kerry, Ireland. Helen will be lovingly remembered by her husband Zachary; her children, Karen (Dan and family); Barry; Lorene; and John (Carol). She was proud of her grandchildren, Heather (Dean and great-granddaughter Mackenzie), John David and Kathryn; Tara (Richard), Leigh, Aeron and Jesse; Sara (Todd and great- granddaughters Addyson, Brynn) and Jared. She will be missed by her sister Marge Miller; sister-in-law Louise Dennehy; as well as numerous nieces and nephews. Helen was predeceased by her granddaughter Kalei, brother John Dennehy; sister and her husband Marion and Jim Milne; and brother-in-law Elmer Miller. Born and raised in Vanguard, Saskatchewan, Helen was trained as a teacher and taught in a one-room school in Bayard, until she married Zack in 1950 and started farming. For years, Helen was the organist in St. Joseph’s Roman Catholic Church, Claybank, served as the President of the Claybank Brick Plant Society during its designation as a National Historic Site, and advocated with the Government of Saskatchewan for a paved secondary road to the Site. In 2009, she and Zack retired to Medicine Hat where they shared their love of music by entertaining at seniors’ residences and other venues. A Prayer Service will take place at 7:00 P.M. on Friday, April 17, 2015, in the Chapel of Eden Brook Funeral Home, 24223 Township Road 242 (17th Avenue South and Lower Springbank Rd; Phone: 403-240-4032). The Funeral Mass will be Celebrated at 11:00 A.M on Saturday, April 18, 2015, at St. Peter’s Roman Catholic Church, (541 Silvergrove Dr NW, Calgary) with Father Jerome Lavigne officiating. Interment will follow at Eden Brook Memorial Gardens. The family wishes to thank the nurses (Kayla, Maria, and Moira) and physicians on the Ward of the 21st Century (Unit 36), Foothills Medical Centre for excellent care. In lieu of flowers donations may be made to the Claybank Brick Plant Society (1-306-868-4474). Condolences may be forwarded to the family by visiting www.edenbrookcemetery.ca. Arrangements entrusted to EDEN BROOK FUNERAL HOME AND RECEPTION CENTRE.

One Condolence for “HOLIZKI – Helen”

Leave a Condolence for Guy and Monique