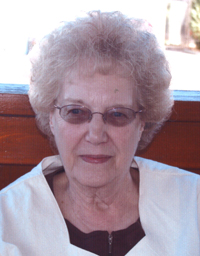 Elaine (Horst) Burgess of Medicine Hat, passed away on Thursday, April 16th, 2015 at the Carmel Hospice St. Joseph’s Home in Medicine Hat at the age of 82 years. Elaine was born on August 10th, 1932 in Calgary and raised in the Cabri, Saskatchewan District. After graduation from high school, she made a trip with her father to Victoria, BC and took up residence there starting night classes. Elaine married a year later and lived in Victoria for ten years, where her four oldest children were born. While her children were young, Elaine joined the Victoria Women’s Army Corps Reserve. In 1961, the family relocated to Medicine Hat and Elaine finished her business courses at Garbutt’s Business School. Her youngest and last son was born in Medicine Hat. Elaine had a particular soft spot for animals of all kinds and the family home was always full of a menagerie of sorts (cats, dogs, chickens, parakeets, horses) – often strays brought home by one or another of her children. Elaine retired in 1997 following 37 years in the work force. She enjoyed her retirement by golfing, bowling, volunteer work and travelling with her brother and sister-in-law, Kenny and Joyce. Elaine was predeceased by her parents, Henry and Lila Horst; brothers, Kenny and Hank Horst; nephew, Steven Horst; and birthmother, Jean Mehrer. Always the one who kept the family together, Elaine will be sadly missed by her children, Thomas (Wendy), Michael (Dalyce), Debra (Bob) Davis, James (Nancy) and Alan (Shelly); eight grandchildren, Jenny (Shawn), Katie, Jordan (Jessica), Marc, Myles (Danielle), Eric, Nicholas and Kenny; two great- granddaughters, Hailey and Carly; and great-grandson, Benjamin. She is also survived by her sisters-in-law, Joyce and Mary Horst, two nieces, three nephews and extended family as well as her half siblings, Florence, Pat and Allan. The Funeral Service will be held at SAAMIS MEMORIAL FUNERAL CHAPEL, #1 Dunmore Road SE, on Wednesday, April 22nd, 2015 at 11:00 a.m. with Gary W. Goran officiating. Interment will follow at Hillside Cemetery. In lieu of flowers, memorial gifts in Elaine’s memory may be made to S.P.C.A., 55 Southwest Drive SW, Medicine Hat, Alberta, T1A 8E8, or to Carmel Hospice, St. Joseph’s Home, 156 – 3rd Street NE, Medicine Hat, Alberta, T1A 5M1. Condolences may be sent through www.saamis.com or to condolences@saamis.com subject heading Elaine Burgess. Funeral arrangements are entrusted to

Leave a Condolence for Dona and John Fyke