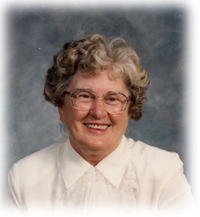 Myra Ethel Anderson of Medicine Hat passed away peacefully at St. Joseph’s Home – Carmel Hospice, Medicine Hat on April 2, 2015 at the age of 83 years. She leaves to cherish her memory her life partner, John Layton; sons, Raymond (Barbara) Anderson of Johannesburg [South Africa] and Lyle (Sandie) Anderson of Medicine Hat; four grandsons, Kyle (Kayla) Anderson and their son, Luke of Calgary, Josh (Brittany Clarke) Anderson of Taupo [New Zealand], Jon (Kassia) Anderson and their son, Daxton of Strathmore and Clark Anderson of Medicine Hat; sisters Nelda Wright and Marion Williams as well as the extended family and friends including her four-legged companions, Fred and Ben. Myra was born on April 23, 1932, in Walsh, Alberta to Stanley and Mary Ibbitson, the youngest of seven children and married Leonard Torwald Anderson in 1953. Together they farmed east of Medicine Hat as well as operating Co-op, All Risk and Cypress Insurance between 1958 and 1972. She was predeceased by her parents, husband Leonard and siblings George Ibbitson (in infancy), Norene Brown, Bette Schritt and Neil Ibbitson. She had a passion for family, gardening, genealogy and travel having visited the USA, Central America, Europe, Africa and Asia over the years. Relatives and friends are invited to join the family in a celebration of Myra’s life at Cook Southland Funeral Chapel, 901 – 13 Street S.W., Medicine Hat on Friday, April 24, 2015 at 1:00 p.m., with Pastor Garth Wehrfritz-Hanson officiating. If friends so desire, memorial tributes in Myra’s name may be directed to a charity of one’s choice. (Condolences may be expressed by visiting www.cooksouthland.com) Honoured to serve the family is

Leave a Condolence for Deb MacLeod