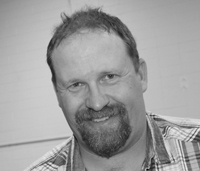 It is with deep sorrow we announce the sudden passing of Stewart Carl Chudleigh on Wednesday, April 22 in a farming accident.

Leave a Condolence for Javier Guevara