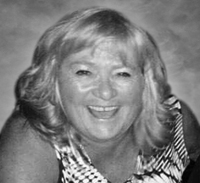 Susan Andersen of Bow Island, Alberta died unexpectedly in Calgary, Alberta on May 1, 2015 at the age of 65.

Susan is survived by her husband, Leif of Bow Island and daughter April Andersen (Sam Scott), of Imperial, California, sister Diane and Terry Forbes and their children Katherine (Chris) Hill and family, Matt (Careen) Forbes and family, all of Queensland, Australia and sister Marina and Doug Jones of Calgary, Alberta with children Zack and Mariel.

Susan was born on October 2, 1949 in Lethbridge, Alberta to Barney and Tillie Wolthuis. The family moved to Calgary in 1954 where she graduated high school at the age of 17 from Viscount Bennett. She lied about her age to try out for the Calgary Stampeders Stampettes cheerleaders, which she did from 1966-1968, including going to the Grey Cup in 1968. She started Nursing School at St. Michael’s in Lethbridge, Alberta in 1967. She met Leif in the spring of 1968 when her and two friends decided to play hooky from studying, to go visit the Simpson family in Bow Island. Susan and Leif got engaged in the fall of 1968 and they married in Calgary on June 28, 1969. The big city girl then moved to the small town of Bow Island for more than a year before they moved to Edmonton where their son Jason was born on February 17, 1971. Having enough of the city life, Susan and Leif returned to Bow Island in the fall of 1971 and have made it their home ever since. Their daughter April was born on August 2, 1972 and the family was complete and happy.

Susan worked at several places before finding her passion at the Bow Island Library, when she started working there in 1980. She was one of the founding members of the Shortgrass Library System, the first library system in the province. She loved working at the library and was instrumental in making the library what it is today. She once held a garage sale during a camping trip, making everyone involved ‘donate’ items from each of their trailers, sending all proceeds to the library expansion.

Being an avid sportsperson, Susan loved playing slo-pitch and golf in the summer and curling in the winter. Her slo-pitch team, The Jets, even made it to the Coors Light Nationals one year. The whole family participated in the Southern Alberta Summer Games until April graduated from high school. She was the typical hockey mom which Jason played for many years. She was a lifelong Stampeders fan and Calgary Flames fan and even converted Leif from being an Edmonton fan to cheer for the correct teams. Susan and Leif loved camping and did it as much as possible. They started out tenting with the kids, before graduating up to trailers and fifth wheelers. Both were adventurous world travelers, visiting many places in Canada, the United States, and Mexico, as well heading to far flung destinations in places like Costa Rica, Singapore, Dominican Republic, Australia and Fiji. Susan and April also went on many girl getaway adventures together, with Leif always calling asking what fun they were going to have next.

Susan was a wonderful woman who enjoyed life to the fullest every day. Her smile and laugh could brighten any room, and her happy fun loving spirit never dimmed. She will be missed not only by her family and friends, but the many lives she touched in her time.

A Funeral Service will be held at St. Michaels Catholic Church (1101 1 St E, Bow Island, AB) on Saturday, May 9, 2015 at 1:00 p.m. with Reverend Fred Monk officiating, reception to follow at the Bow Island Legion. All are welcome to attend and celebrate and remember Susan’s extraordinary life. If you wish, in lieu of flowers, please send donations to Bow Island Municipal Library, care of the Town of Bow Island. The family would like to thank Dr. Woodruff, Dr. Jenna, Dr. Villaneuva and all the staff in ICU at Medicine Hat Regional Hospital. Condolences may be forwarded through http://www.mcinnisandholloway.com www.mcinnisandholloway.com.