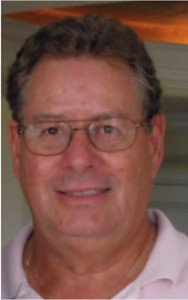 May 24, 1950 – May 28, 2015 With disbelief and heavy hearts we announce that Randy passed away peacefully in Bradenton, Florida, surrounded by loved ones whom, if not at his side, were in his heart. After being diagnosed with aggressive brain cancer a little more than a month ago, Randy knew he had little time left, so he went out swinging – a golf club that is! Up until a few days before his passing he was still hitting golf balls with friends and enjoying the Florida sunshine with the love of his life, Melinda and their Siamese cat-“kids” Luke and Lulu. Randy lived long enough to celebrate his 65th birthday; he said not making it to that milestone would be like “hitting the ball just shy of the green.” Randy’s love of golf began in his early teens on the courses of Medicine Hat. After making Florida his home in 1987, he returned to “The Hat” for many years to join life-long friends in the annual Victoria Day tournament. Randy is survived by his wife Melinda Torgerson, daughter Rene Hemenway, brothers and sisters; Ron (Mary) Torgerson, Carl (Helena) Torgerson, Cathy (John) Sutter, Nattacia (Jurgen) Mantei and Gordon (Norma) Fabbi. He also leaves to morn his loss the nieces and nephews whom he adored; Crystal and Cassandra Sutter, Rhonda (Brad) Pearson, Len and Mark Torgerson, plus many others who saw him as their Uncle Randy. The family feels comfort in knowing Randy has been met at heaven’s door by his parents, Alberta (deceased 1974) and Harold Torgerson (deceased 2000), along with the countless loved ones he’s said farewell to along the way. They are all together once again, in peace – likely playing the back nine! Plans for Celebration of Randy’s Life TBA.

Leave a Condolence for VA