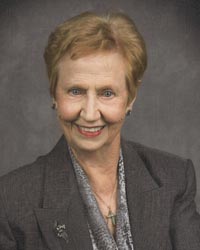 Adele (Havard) Armstrong, well known musician, passed away peacefully on Tuesday, October 27th, 2015. Lifetime resident of Medicine Hat, Adele was the daughter of English and Welsh parents, Reginald and Elizabeth (Owen) Havard. Adele was predeceased by Jack, her loving husband of 54 years; devoted brother and concert baritone, Lorne; and the joy of her life, twin daughters, Merelie and Melodie. A career that began in a musical home was nurtured through years of study in piano, voice, and organ providing the foundation for a lifetime of musical accomplishments. Teacher, lecturer, composer, singer, concert accompanist, organist, actress, director – Adele was the ultimate entertainer. Academically, Adele earned degrees from the Royal Conservatory and Wellesley College (Boston, MA). The years of study and performing in the Musical Theatre and Opera divisions at the Banff Centre led to her joining the staff of the summer program as vocal coach and accompanist.

In her home studio over a teaching span of more than 50 years, thousands of students were prepared for piano and vocal exams, festival competitions, and performances. Her career as church organist and director began in her late teens when she provided musical leadership at Westminster United Church and then later as organist at Fifth Avenue United Church devoting decades of service to the church.

Together with her immensely talented brother, Lorne, she toured and recorded. An acting career included several roles on the local and provincial stage. When musical theatre was reinstated in Medicine Hat, two of her favorite memories were “Oklahoma” where Adele sang the female lead and “Fiddler on the Roof” with her brother, Lorne playing the lead Tevya.

Her community choirs – children, youth, adults – staged musical performances in the Spring and Christmas seasons. Founder and director of five city choirs, The Teen Tones, The Saamis Singers, The Kodaly Children’s Choir, the Adele Armstrong Singers Mixed Chorus, and The Armstrong Ladies Choir, all her choirs competed, toured, and recorded for over four decades winning local, provincial, national, and international awards. Most memorable to Adele was the invitational concert tour of Poland and competitive concert tour of England, Scotland, and Wales.

Adele was a lifetime member of Beta Sigma Phi and many musical associations including Registered Music Teachers, Alberta Choral Federation, Canadian Festival Federations of Adjudicators, and on the Board of Governors Banff Centre. Her devotion to musical leadership earned her multiple awards including Medicine Hat Outstanding Citizen and Citizen of the Year, The Sir Frederick Haultain Provincial Award for Arts and Sciences, and the Queen’s Golden Jubilee Medal.

Adele will be missed by many but none more than her loving family: grandchildren, Maddeson Coutts and Jacqueline Tong; son-in-law, Steve Tong; sister-in-law, Hazel Moser; niece, Doreen (Mike) Moug and children Diane, Karen, and John; and nephew, Robert (Judy) Moser. Her absence will be felt everyday by her chosen daughter and loving friend, Kim Shorthouse and a wide circle of her “friends of music”.

The Funeral Service will be held at FIFTH AVENUE MEMORIAL UNITED CHURCH, 476 – 4th Street SE, on Thursday, November 5th, 2015 at 2:00 p.m. with Reverend Blaine Schaufele officiating. A Private Interment will take place at Hillside Cemetery. Memorial gifts in Adele’s memory may be made to the charity of one’s choice or to the Adele Armstrong Fund at Community Foundation to support choral music in our community. Condolences may be sent through www.saamis.com or to condolences@saamis.com subject heading Adele Armstrong. Funeral arrangements are entrusted to

One Condolence for “ADELE ARMSTRONG”

Leave a Condolence for Lawrence Rodnunsky