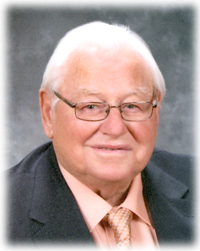 Ed Kornelson, beloved husband of Doris, passed away peacefully at the Riverview Care Centre in Medicine Hat on Sunday, December 6, 2015, at the age of 85 years. Along with Doris, his loving wife of over 59 years, Ed’s memory will live on in the hearts of his three daughters, Janet (Pat) Janzer, Wendy (Tom) Beach and Patti (Todd) Penner of Kelowna; six grandchildren, Amy (Tyler) Deck, Matthew Janzer, Jade and Brett Beach, Ashton and Haleigh Penner as well as two great-grandchildren, Huxley and Rowen Deck. Ed is also survived by two brothers-in-law, Bob (Lorraine) Monkman and Jack (Audrey) Monkman as well as numerous nieces and nephews. He was predeceased by a son, Ronald, in 2006 as well as his parents, two sisters and three brothers. Ed was born on March 10, 1930, in Indian Head, Saskatchewan. A hard worker and a focused individual, one of his first jobs had him working in construction, building roads and dams. He then moved on to the oil field, working with Alberta Gas Trunk Line before starting his own business, Kornelson Inspection. In 1973, while still working in the oil field, Ed and Doris purchased a farm. It was a labour of love, and he continued to work and farm up until their move to Medicine Hat in 1996, retiring in 2000. During retirement, Ed made the most of each opportunity to golf, travel or just spend some time relaxing while gardening. He was a longtime member of the Shriners and a tireless advocate for the Shriners Hospital for Children. Every year, he looked forward to participating with the Shriners in the Medicine Hat Stampede Parade. His generous nature and kind heart will not soon be forgotten. A Celebration of Ed’s life will be held at Cook Southland Funeral Chapel, 901 – 13 Street S.W., Medicine Hat on Thursday, December 10, 2015, at 3:00 p.m. with Rev. Dr. Shane Andrus and Rev. Jan Stevenson officiating. A time of fellowship will follow immediately thereafter in the Cook Southland Reception Facility. (Condolences may be expressed by visiting our website at www.cooksouthland.com) If friends so desire, memorial tributes may be made to the Shriners Hospital for Children, P.O. Box 1201, Station Main, Medicine Hat, Alberta, T1A 7H3 or to the Medicine Hat and District Health Foundation towards Palliative Care, 666 – 5 Street S.W., Medicine Hat, Alberta, T1A 4H6. Honoured to serve the family is

Leave a Condolence for Jane Stobbs-King