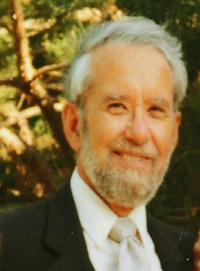 Dr. Paul Charles Racette died on Dec 5th, 2015 at the age of 88 in Surrey, BC. He was born in Edmonton, Alberta to parents Valéda Sabourin and Rosaire Racette. Paul grew up in Blairmore and St. Paul, Alberta, and graduated from the Faculty of Medicine at University of Alberta. He met his wife Lois while in medical school, and they practiced together for several years in McLennan, Alberta. They then moved to Boston where Paul specialized in Pathology at the New England Deaconess Hospital. Returning to Canada, they moved to Edmonton, then to Red Deer before settling in Medicine Hat, where they lived for 46 years. Paul spent his final years at Westminster House in Surrey. He and Lois were very happily married for 61 years. He is survived by a close and loving family including his wife Dr. Lois Racette of Medicine Hat/ White Rock and their children Dr. Thérèse Racette (LeNeveu) of Winnipeg and her children Renée and Marc, Paul Joseph Racette (Katie) of Rambouillet, France and their children Camille and Emerson, and Dr. Jocelyn Racette/ Olsén (Lars Goran) of Karlskrona, Sweden, and their children Michael, Susanne, and Therese/ Tessa. He is also survived by his sisters Jeanne Dawson (Brian) of Calgary and Pauline Howatt (Gerald) of Edmonton/ Calgary and their children. He was predeceased by his daughter Denise Grant (Racette) of White Rock, BC. Paul had a distinguished career as Chief of Pathology at the Medicine Hat Hospital and the Medicine Hat Diagnostic Laboratory. For many years he served as president of the Medicine Hat Cancer Society and later president of the Alberta Cancer Society. His interests were many and varied. His love of the wilderness included working university summers in the Yukon with the Geodesic Survey of Canada, hunting and fishing with his favorite uncles, and skiing, canoeing, wilderness hiking and camping with his wife and children. In later years, Paul and Lois immensely enjoyed traveling. Their favorite trips were to the High Arctic, Antarctica, The Arches, Galapagos Islands, Sweden and France. Paul was passionate about flying. On weekends, he was very often to be found at Medicine Hat’s Bar-XH Aviation, either flying or chatting with fellow pilots. He and Lois often flew together to various locations, several times over the Rockies including a trip to Vancouver. They also flew their single-engine Comanche to Mexico City and back. He was inventive, multi-faceted, and possessed an unwavering determination. His dry wit would occur at very unexpected moments. Paul was a gentle, kind, and loving father, husband, and brother, and always helpful and understanding with family, friends, colleagues and the many laboratory staff. He touched the lives of so many people. Special thanks to the staff at Westminster House, Chelsea and staff from Bayshore, and his devoted care giver Juliette. We will miss him dearly and he will be forever in our hearts. Service of Remembrance will be held at 1:00 pm Friday, December 11th, 2015 at Victory Memorial Park Funeral Centre, 14831 – 28 Avenue, Surrey, BC. A donation can be made to the Medicine Hat Hospital Foundation or Alberta Cancer Society.