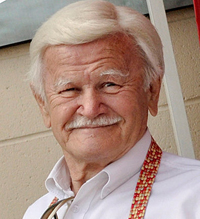 Clarence Heringer, former advertising director of The News who passed away Tuesday, smiles during a 2012 charity barbecue for Jumpstart.

Clarence was born in Medicine Hat, Alberta on January 13, 1939. He married his sweetheart, Ruth, in 1960. Clarence had deep faith in God and he was a compassionate and loving husband, father, grandfather, and friend. Clarence brought joy to the lives of people around him. He had a tremendous sense of humour, and zest for life, which brought a positive and hopeful outlook to everyone he touched.

Clarence had a passion for music, and profound sense of commitment to give back to his community. He demonstrated this throughout his life as he partnered to establish the Medicine Hat Marching Boys Band, regularly performed musically at church and community functions, and played in the gospel band ‘Play It Again’. He was a self-taught musician, who played many different instruments including the piano, organ, trumpet, accordion, but his favourite was the trombone. Clarence also enjoyed time serving the Medicine Hat community in many other ways including service to the Lions Club, Stampede Parade, and Jump Start.

Clarence ‘s family would like to extend an invitation to celebrate the life of their beloved husband, father and grandfather at Hillcrest Evangelical Missionary Church on Saturday December 12, 2015 at 12 noon. In lieu of flowers please send donations to Prairie Gleaners Society, 112 1st Street SW, Medicine Hat, AB T1A 3Y9. To e-mail an expression of sympathy, please direct it to: pattfh@telusplanet.net subject heading: Clarence Heringer, or you may visit www.pattisonfuneralhome.com and leave a message of condolence.

Leave a Condolence for Elsie Johnson