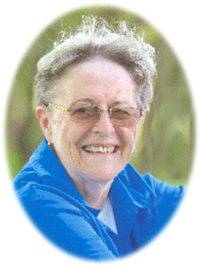 June Ann Walters of Medicine Hat, beloved wife of the late Wilfred “Wish” Walters, passed away peacefully with her girls by her side on Sunday, March 20th, 2016 at the age of 81 years. June leaves to cherish her memory her daughters, Cindy (Ray) Buscholl and Alann (Garry) Klaudt; four grandchildren, Tanya (Jesse) Whitaker and son, Eric, Jenna Copper (Tylor) and sons, Zeth, Decklyn and Jaxon, Brenden Copper and Kurtis Copper; one sister, Barbara Purich; as well as numerous brothers-in-law, sisters-in-law, nieces and nephews. June was predeceased by her husband of 59 years, Wish on December 5th, 2015; and her parents, James and Dorothy Deacon. June was born on September 3rd, 1934 in Winnipeg, Manitoba. She worked as a Bank Teller for 25 years with CIBC – Sub-Branch, CFB Suffield. June loved nothing more than time with family and snuggles with her grand babies. She loved to eat out and enjoyed her date night with Wish every Friday night. It is June’s request for anyone attending the service to wear blue jeans, favourite blue shirt and a smile. The Funeral Service will be held at SAAMIS MEMORIAL FUNERAL CHAPEL, 1 Dunmore Road SE, on Thursday, March 24th, 2016 at 1:30 p.m. with Gary W. Goran officiating. Interment will follow at Saamis Prairie View Cemetery. Memorial gifts in June’s memory may be made to charity of one’s choice. Condolences may be sent through www.saamis.com or to condolences@saamis.com subject heading June Walters. Funeral arrangements are entrusted to

Leave a Condolence for Freda and Harold