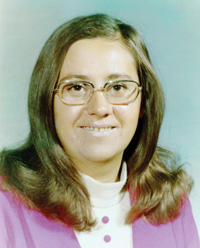 Shirley Anne Oshanek-Markov passed away peacefully in Medicine Hat Regional Hospital on Thursday, February 2nd, 2017. Shirley is the daughter of William Oshanek and the late Mary Oshanek (nee Chopey). She was the loving wife of Alexander (Alex) Markov; loving sister of Sharon Oshanek of Medicine Hat, Alberta; honoured to be sister-in-law to Larissa Pereira (nee Markov) and Joel Pereira of Mississauga, Ontario; proud to be aunt to Amanda, Andrew, and Julia Pereira of Mississauga, Ontario; and niece to the many uncles and aunts in the Chopey and Oshanek families and cousin to their children.
Shirley was born in Yorkton, Saskatchewan and grew up in the area in the 1950’s and 60’s. She often spoke fondly of her early years on the farm of her grandparents (the late George and Anne Oshanek) and on spending time with her other grandparents (the late John and Pearl Chopey) in Springside, Saskatchewan where her grandfather was station master, and where she came to know and love trains. After graduating from Sacred Heart Academy in Yorkton, she went on to obtain a Bachelor of Arts from the University of Saskatchewan (Regina Campus). She was a teacher in southern Saskatchewan for several years until 1976 when she moved to Toronto to be with Alex, the love of her life.
Shirley and Alex lived in Toronto until 1981 during which time Shirley worked part time for Alex’s father, the late Dr. Bozidar Markov, as a medical office receptionist. Shirley and Alex moved to Medicine Hat in 1981 when Alex accepted a position in research and development at Defence Research Establishment Suffield and they have lived in Medicine Hat since that time. In more recent years, Shirley and Alex have spent time in North Saanich near Victoria, British Columbia where they have a second home.
Shirley was an avid supporter for the development and preservation of wildlife areas and sanctuaries and for the prevention of cruelty to animals. In the early years in Medicine Hat, she volunteered at Medicine Hat’s Police Point Park Interpretive Centre. She also had a passion for reviewing and collecting information…she was a voracious speed reader and was interested in and read everything from newspapers, to biographies, to aviation and military books and magazines, to fiction (with a particular interest in fiction with military themes). While in Medicine Hat, Shirley worked towards a second degree, a Bachelor of Education, which she obtained from the University of Regina in 1983.
Shirley and Alex shared a life-long passion for aviation. In 1991, this interest led Shirley and Alex to create Amtech Aeronautical Limited, an engineering consulting company specializing in the aeronautical, military engineering, and automation areas. In no small measure due to Shirley’s business acumen in all facets of the administrative and corporate management areas of the organization, the company has developed and maintained a skilled, experienced engineering team and a strong reputation with clients throughout Canada, the United States, and abroad. Shirley’s and Alex’s investment interests also extend to real estate with a number of property investments in the Medicine Hat and Victoria areas.
Shirley and Sharon were particularly close sisters, sharing common interests such as music and books. Shirley helped Sharon resettle to Medicine Hat in 1991. Sharon’s previous office training and experience were put to good use in the Amtech organization where the two sisters often worked on improving administrative and cost tracking processes.
Since being diagnosed with ovarian cancer in 2011, Shirley fought the disease tenaciously and courageously for six years choosing aggressive and, at times, experimental therapies. The family is grateful that for most of this period of time, she was in relatively good health and pain free. We are highly appreciative of the care and comfort provided by Shirley’s doctors, nurses, care givers, support services, and other staff at the Tom Baker Cancer Centre, the Calgary Foothills Medical Centre, the Margery E. Yuill Cancer Centre, the Medicine Hat Regional Hospital, and Medicine Hat Paramedic Services. We are especially grateful to Shirley’s family doctor (Dr. Filanti) of Medicine Hat, Dr. Best of the Medicine Hat Regional Hospital, Dr. Foley of the Margery E. Yuill Cancer Centre, and Dr. Ghatage of Tom Baker Cancer Centre, and their associates and staff. A special thanks also goes out to the pharmacists and staff at Pharmasave in Crescent Heights, Medicine Hat.
At Shirley’s request, there will be no service at this time. A Celebration of Life will be held in one year’s time. If desired, in lieu of flowers, the family would appreciate a donation to the Alberta Cancer Foundation, Suite 300, 1620 – 29 Street NW, Calgary, Alberta, T2N 4L7, or to the Canadian Cancer Society, PO Box 4613, Station E, Ottawa, Ontario, K1S 1P7. Condolences may be sent through www.saamis.com or to condolences@saamis.com subject heading Shirley Oshanek-Markov. Funeral arrangements are entrusted to
SAAMIS MEMORIAL FUNERAL CHAPEL CREMATORIUM & RECEPTION CENTRE, “The Chapel in the Park” #1 Dunmore Road SE, Medicine Hat, AB T1A 1Z5 (403)528-2599 www.saamis.com inquiry@saamis.com Locally owned and directed CGR Holdings Ltd.

One Condolence for “SHIRLEY ANNE OSHANEK-MARKOV”

Leave a Condolence for Bob Brillinger