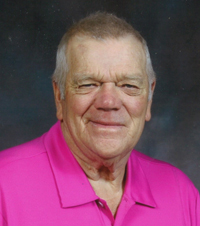 George was predeceased by his parents, Jack and Freda (Bradley) Errington; an infant brother, John; his sister, Jean Duncan; brothers-in-law, Gus Blue and Dennis Duncan; as well as his in-laws, Roy and Betty Steier.

George was born and raised in Nipawin, Saskatchewan. After high school, George’s banking career started with the Bank of Montreal in Nipawin spanning posts in three provinces and retired with the Weyburn Credit Union. In 1987, George and Irene “semi-retired” to Courtenay, BC when they purchased the Anco Motel with their partners. In 1999, George and Irene retired to Medicine Hat. Over the years, George was active with Weyburn Kinsmen and K-40, Happy Hatter’s and the Chartwell community, just to name a few. He especially enjoyed the Desert Aire community in Indio, CA that George and Irene called home every winter. George’s network of friends encompassed any group or project he was involved with, and he enjoyed many.

The Funeral Service will be held at HOLY FAMILY PARISH, 1451 Strachan Road SE, on Monday, March 6th, 2017 at 11:00 a.m. with Father Philip Le, officiating. In lieu of flowers, memorial gifts in George’s memory may be made to the Palliative Care Unit, c/o Medicine Hat & District Health Foundation, 666 – 5th Street SW, Medicine Hat, Alberta, T1A 4H6. Condolences may be sent through www.saamis.com or to condolences@saamis.com subject heading George Errington. Funeral arrangements are entrusted to

One Condolence for “GEORGE ERRINGTON”