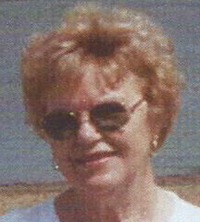 During her childhood she and her siblings Laura, Lloyd, Wallace, Fern, Lillian, and Evelyn lived in the Crane Lake and Piapot areas. After graduating from Piapot High School she began working at Pigotts Store. She married Alfred Sanderson and they raised their daughter Carol on the farm in the Piapot area.

In the early 70’s Dorothy left Piapot and spent a few years in Medicine Hat and worked in retail and a medical clinic. She later married Alex Walmark and they settled in the High River area. For many years their hours were spent enjoying their music, entertaining and hosting friends and family, and socializing at the East Longview Hall. Dorothy and Alex returned to the Medicine Hat area.

Dorothy was fortunate to find a companion in her later years and in 2006 she married Jim Sanderson.

They spent their happy golden years dancing, playing music, berry picking, drives to Piapot, going on many vacations with Manitou Beach being their favorite. Dorothy was a fun loving woman who always had a goodie in the kitchen for anyone who cared to drop by. She was known by all, especially by her nieces and nephews to be a very generous person. Her door was always open, her treat jar always full, she never forgot your birthday or a special occasion, and would give you a dollar whenever you needed one. Her smile and little girl laugh will never be forgotten. She is survived by her husband Jim Sanderson and his family, her daughter Carol, her sisters Fern (husband Gus Wudrich), Evelyn Meston, her many nieces and nephews, and many good friends. Her struggles are over however she will be greatly missed by many. We wish to express our sincere thanks to the wonderful staff of Yellow House Longterm Care in Maple Creek, Sask., who provided her with kind and loving care. In lieu of flowers donations may be made to the Yellow House in Maple Creek, Dorothy’s life will be celebrated at a later date in Piapot with an announcement made closer to the date.

Funeral arrangements entrusted to Binkley’s Funeral Service. Condolences may be offered to the family at www.binkleysfuneralservice.com

One Condolence for “DOROTHY MAY (McFAUL) SANDERSON”

Leave a Condolence for Marilyn Herrmann