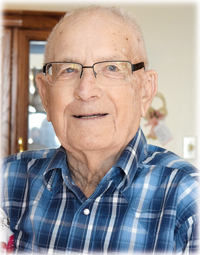 Friday, February 10, 2017
NEWS PHOTO EMMA BENNETT
Martha and Gordon Wilson are celebrating their 72nd wedding anniversary on February 15. The couple who are originally from Saskatchewan were married in Medicine Hat in 1945.

It is with heavy hearts that the family announce the passing of Gordon George Wilson, beloved husband of Martha Wilson, at St. Joseph’s Carmel Hospice on Sunday, April 16, 2017, at the age of 96 years. Gordon was born on December 30, 1920 in Gull Lake, SK. He married the love of his life, Martha Erickson on February 15, 1945 in Medicine Hat in the United Church Manse. Gordon had a love for farming and enjoyed carpentry, bar tending and worked as a jack of all trades. He enjoyed collecting toys, antiques, playing cards, doing wood working and tending to the flowers and his garden. Gordon was a community minded individual participating with the Royal Canadian Legion, Abbey Golf club, Ross Creek Golf club, Abbey Curling club and the Swift Current Curling club where he played and won numerous curling events throughout the years. He was proud of his achievements including an eight ender in curling, a hole in one at the age of 93, their anniversary, but especially their children’s weddings, the birth of their grandchildren and great-grandchildren and the weddings of the grandchildren were all special moments for Gordon. Left to treasure his memory is his loving wife, Martha; children, Rod (Rhonda), Darryl, Myra (Gary) Evert; six grandchildren, eight great-grandchildren, six step grandchildren, eleven step great-grandchildren; brother, Albert (Edith), sister, Violet (Garth) Dewar as well as numerous nieces and nephews. Gordon was predeceased by his parents; sister, Rose (Maurice) Thompson and daughter-in-law, Georgina. If friends so desire, memorial tributes in Gordon’s name may be made directly to St. Joseph’s Carmel Hospice, 156 – 3 Street N.E., Medicine Hat, Alberta T1A 5M1. The Celebration of Gordon’s life will be held at Cook Southland Funeral Chapel, 901 – 13 Street SW., Medicine Hat, on Friday, April 21, 2017 at 2:00 p.m. with Life Celebrant Gerry Getz officiating. (Condolences may be expressed by visiting our website at www.cooksouthland.com) Honoured to serve the family is

One Condolence for “GORDON WILSON”

Leave a Condolence for Dwayne and Joyce Thompson