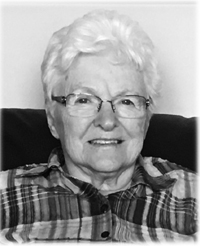 Our Mom, Jean (McKenzie) Loewen, sadly passed away on Saturday, July 8, 2017, while surrounded by the love of her family. She was predeceased by her first husband of 54 years, Glenn McKenzie and then met and married Glen Loewen in 2009. Over the past two years since her diagnosis of breast/bone cancer, Mom was grateful for the support and encouragement of family and friends. Her memory will be cherished by her husband, Glen Loewen; three children, Lee (Judy) McKenzie, Cheryl (Sam) Gust and Dale (Kim) McKenzie. Jean is also adored by her three grandchildren and seven great-grandchildren, Christy (Tom) Wilde, Keri Gust, Sam (Heather) Gust, Lachlan and Cait MacMillan, Reeve, Saige and Calli Wilde and Mack and Macy Gust. She will also be missed deeply by her three sisters whom she was very close to, Frances Hart, Bonnie Schlinker and Jackie (Dan) Sodero as well as numerous nieces, nephews and cousins. Along with her first husband, Glenn, Jean was predeceased by her parents, Walter and Hilda Hutchison, Bill and Emma McKenzie; brothers-in-law, Don Hart, Harris Pahl and Marvin Schlinker. Jean and her family enjoyed farming and ranching for many years raising Purebred Herefords and embracing the rural life, eventually retiring to town in 1998. She was very dedicated to her religion and friends at the Kingdom Hall of Jehovah’s Witnesses. A Celebration of Jean’s life will be held at Cook Southland Funeral Chapel, 901 – 13 Street S.W., Medicine Hat on Wednesday, July 12, 2017, at 2:00 p.m. Private interment will take place prior to the service. (Condolences may be expressed by visiting our website at www.cooksouthland.com) As an expression of sympathy, donations may be made to the St. Joseph’s Home – Carmel Hospice where Jean received excellent care, 156 – 3 Street N.E., Medicine Hat, AB., T1A 5M1 or to the charity of one’s choice. Honoured to serve the family is