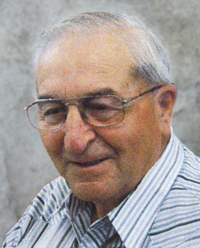 William Wutzke, passed away in Bow Island with his beloved wife Louise by his side on Tuesday, October 17, 2017 at the age of 82 years.

The Funeral Service will be held at St. Andrew’s United Church, 139 – 2 Avenue West, Bow Island on Saturday, October 21, 2017 at 2:00 P.M. Burial to follow at the Bow Island Cemetery. Condolences may be forwarded by visiting our website at www.southlandfuneral.com.

Bill was born in Medicine Hat on October 23, 1934 to Edward and Henrietta (nee Rothe) Wutzke. He lived most of his life on the family farm six miles south of Conquerville. Bill attended Lancaster one room school for grades one to five. He then attended Conquerville Consolidated School for grades six to ten. It was here, in grade six, that he met the love of his life, his sweetheart Louise Gibson. They began dating when she was in grade four. Bill attended part of high school in Medicine Hat; he left school to help his dad on the farm. Bill and Louise were married on October 29, 1955, and took over the farm when his folks retired to Bow Island. He always loved farming. Lynn was born in 1957, followed by Bruce in 1959. Also in 1959, Bill added a new facet to his farming adventure by taking flying lessons. Next this flying farmer purchased T&D Aerial Spraying Ltd. in 1964. For the following years, he served many farmers as their aerial applicator, along with caring for his family, crops and livestock. In 1978, Bill and Louise moved to their new home in Bow Island and relocated the spray business to the new airport there, along with continuing to farm. Bill added a second plane to the fleet and for several years Bruce sprayed alongside his Dad. They also, along with Bill’s brother Robert, operated Red Fox Aviation, a commercial charter service. The planes were parked in 1996, when Bill decided to keep his feet on the ground, and the last plane and hangar were sold to Nathan and Carla Hoffman in 2011. Together Bill and Louise spent many winters in Arizona as rockhounding snowbirds, and are charter members of the Medicine Hat Rock and Lapidary Club. Bill created beautiful jewellery. Bill and Louise made many good friends along the way, adding to their lifelong farm community friends. They officially retired from farming in 2015.

One Condolence for “BILL WUTZKE”

Leave a Condolence for Matt and Brenda Van Gaalen