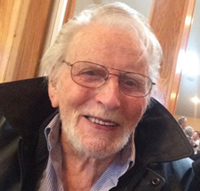 Leonard Louis Lazzari, at the age of 93, has passed peacefully into the arms of our Lord on January 22, 2019 in Red Deer. Len was born in Medicine Hat, Alberta on January 13, 1926 to Ezechiele (Gino)Lazzari and Angela Pierdona. Leonard Spent his early childhood with relatives in Miane Italy until the age of 13 years old and then returned to Canada. At the age of 17 he joined the Royal Canadian Navy in 1944 and served until the end of World War II. Len married Esther Genert shortly after. Len liked working with his hands (mechanic), loved cars, hunting, and farming. His employment with Alberta Transportation included grader operator, heavy duty diesel mechanic and advanced to shop

supervisor (with recognition). Inventions were part of his legacy, the one most notable was the modifications to snow blades on snow plows. In his later years he settled in Sylvan Lake. He loved seeing his children, grandchildren and great grandchildren when they came to visit. His spirits were always picked up with their visits.He had a passion for building things, writing, and learning. Well into his 70’s, he developed competent computer skills and was using them almost daily to the end.He was an inspiration to his children and those who knew him. He always believed that “If someone else can do it, then so can you. Learn how!” Though he appeared hard to some on the outside, he was soft on the inside and easily brought to tears. He was a romantic. Leonard is survived by by his wife of 73 years, Esther, children Jim (Carol) Lazzari, John (Wanda) Lazzari, Jacqueline (Dwain) Hope, Joe (Marilyn) Lazzari, and Jason (Marlene) Lazzari.

He is survived also by 12 grandchildren and approximately 30 great grandchildren. The Funeral Mass will be held at the Our Lady Of Assumption Catholic Church, 5033 47a Avenue, Sylvan Lake, AB on January 29th, 2019 at 11:00am. After Mass, lunch will be served at the Sylvan Lake Legion Branch 212. There will also be a prayer service held at the Church on Monday, January 28th,2019 at 7:00pm. For those wishing to make a memorial contribution in Leonard’s name, in lieu of flowers, donations can be directed to the Heart Function Clinic at the Red Deer Regional Hospital. Condolences may be forwarded to www.sylvanlakefuneralhome.ca Cremation will be entrusted to Rocky Mountain Crematorium, Rocky Mountain House, AB Sylvan Lake and Rocky Funeral Homes and Crematorium, your Golden Rule Funeral Homes, entrusted with the arrangements. 403-887-2151

One Condolence for “LAZZARI”

Leave a Condolence for Broc Braconnier