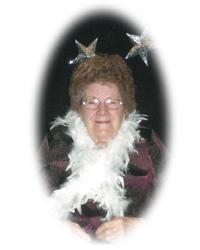 LOUISE ALICE ANDERSON (nee Parsons) of Lethbridge, adored wife of the late JAMES ANDREW ANDERSON (1926–1995) and the loving and loved mother of her late son, ROBERT JAMES ANDERSON (1949–2011), very peacefully passed away on 6 September, 2012 with her daughter nearby.
Louise is survived by her daughter, Louise (Lynn) Belcourt, her son-in-law, James Robert, her granddaughter Christine and great-granddaughter Danielle, her grandson Vincent and his children Anthony and Krystah.
She also leaves her sisters, Margaret (Tom) McInnis and Pat (Ken) Brown, and sisters-in-law, Olive (Scotty) Train, Helen (Dick) Anderson and Olive (Stewart) Anderson and many loved nieces and nephews.
Mom was pre-deceased by far too many – a brother, sisters-in-law, brothers-in-law, nieces and nephews and too many friends.
Having been born in 1920, raised, married in 1949, given birth in 1949 and 1951 and then died at the age of 91 in Lethbridge, this windy city and the mountains to the west were truly her home. Her life was filled with physical disabilities and short-term injuries and illnesses, but she showed only stoicism, determination and humour through it all. Known for her loyalty, intelligence, privacy, “Lady-Like” demeanour and being a great hostess to her large circle of friends, Mom retained her dignity to the very end.
Mom, Dad and Robert will be interred together at a GRAVESIDE service to be conducted by Rev. Andrew Horne, of St. Augustine’s Anglican Church, at 2:00 P.M. Thursday, 13th September, 2012, at the MOUNTAIN VIEW CEMETERY. Friends and Family are welcome to attend.
In memory of Louise, donations may be made to a charity of your choice or to the Lethbridge and District Humane Society P.O. Box 783, Lethbridge, AB T1J 3Z6.
Honoured to Serve
Cornerstone Funeral Home & Crematorium
2800 Mayor Magrath Drive South
Lethbridge, Alberta T1K 7B1
Telephone ~ (403) 381-7777
Fax ~ (403) 381-3128
Toll Free ~ 1-(888)-381-7778
care@cornerstonefh.ca