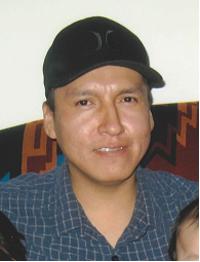 Our beloved son, JUSTIN WADE EAGLE CHILD, was welcomed into the Kingdom of God on Sunday, September 9, 2012 at the age of 34. He leaves to mourn his children Aubrey, J.T., Nate, his only daughter Chalaine; his common law wife Chantal Scout; parents Cyril & Patty Eagle Child; sister Andrea (Perry); brother Tommy (Raven); one nephew Huxley & one adopted brother Matt. He became an uncle last year and was quite proud of his nephew.
He is survived by his paternal aunts Delores (Roy), Vivian, Dolly (Jim); his late aunts Rosaline and Velma; uncles Roland, Campbell (Arlene), Lloyd, Winslow, Evans, Patrick (Lori Anne); his maternal aunts Mary (Dan), Mavis and his late aunts Leita and Evelyn; uncles Aylmer (Sharon), Delroy (Wilomena) and his late uncle Robert; godparents Corrine Big Sorrel Horse & Lloyd Eagle Child; goddaughter Taylor Crow; many first cousins too numerous to mention. His extended family includes the Chief Moon’s, Eagle Plume’s, Many Finger’s, Fox’s, Bruised Head’s, Blood’s, Pace’s, Young Pine’s, Oka’s, Weasel Fat’s, Healy’s, Cross Child’s and No Runner’s. We apologize if we have missed any families. Justin adopted his eldest aunt, Martha Oka Minoose, as his grandma and often checked up on her; also his cousin Marlene, as an Auntie, who loved him very much. Justin was predeceased by his paternal grandparents Patrick & Bibiane Eagle Child and his maternal grandparents Tom & Madeline Oka.
Justin was raised on the Blood Reserve and attended school in Standoff and Cardston. In his younger years, Justin enjoyed playing hockey and attended hockey schools in Coaldale and Calgary. His parents encouraged and supported Justin in hockey. They became a dedicated hockey family and travelled across Southern Alberta and into British Columbia. As a result of his hockey years, he had many life-long friends. Justin’s best friend was the late Elliot Weasel Fat. They grew up and played hockey together so Clarence and Diane Weasel Fat adopted Justin as their son. His team was the Calgary Flames and loved to cheer for them.
As a youngster, Justin rarely left home without his parents but once he travelled to Montana with his aunt, afterwards travel seemed easier for him. Justin had quiet presence about him. Later in life, this helped him acquire many friends. When Justin grew up he was blessed to become a father and then dedicated his life to his children. He was a devoted dad, tended to their needs, and thought the world of his children.
Justin often went visiting and he had many surprise visits with his family and friends. He often joked around with them and had a great sense of humor. His favorite place to travel was Vancouver to visit with his cousins. Justin was an avid cook and enjoyed feeding his family. His mom loved it when Justin came to visit because he would often do the cooking and could whip up a great meal. His other interests were chess, crib and Sudoku. He often tried to teach others about his passion for Sudoku.
Justin attended college and worked in Edmonton. His favorite place of employment was Lavern School and was employed as a Teacher’s Assistant. He often spoke kindly of the late Mildred Good Striker who encouraged him to pursue a career in Education. Justin worked different jobs as a general labourer in Lethbridge. Recently, he was looking into a training program to go back to school.
When his young cousin Joel heard of his death, he described Justin the best, “He was a good man!” Justin’s family will remember him as a kind and gentle soul who thought of others before himself. He was grateful for the little things in life. Justin spent time with his friends who were his extended family at Streets Alive and the Lethbridge Shelter.
The Wake Service will be held on Friday, Sept. 14th at the Streets Alive Mission (323 4th Street South), Lethbridge from 3:00 to 5:00 p.m. and continue at the Old Saipoyi Gym, Stand Off from 7:00 to 11:00 p.m. The Funeral Service will be held at St. Mary’s Catholic Church, Blood Reserve on Saturday, Sept. 15th at 11:00 a.m. with Father Pawel Andrasz, Celebrant. Interment in St. Catherine’s Cemetery, Blood Reserve.
Arrangements entrusted to Cal Salmon.
Legacy Funeral Homes Ltd.
P.O. Box 208
Cardston, Alberta T0K 0K0
Phone (403) 653-3222
Fax (403) 653-3677
legacyfh@telus.net