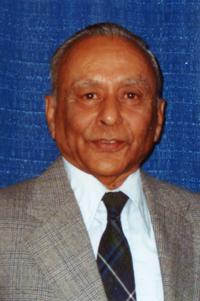 Menino S Furtado of Lethbridge, Alberta, beloved husband of M Amalia Furtado, passed away peacefully on September 4, 2012.
He is survived by his wife, Amalia, daughter Sarah (Christopher), sons Francis and Xavier (Carrie Lee) and granddaughter Naomi. Menino also leaves behind his brothers Valentine (Sylvia) and Christie (Angela), his sister Olga (late Chico) as well as numerous nieces and nephews.
Menino was born on the island of Lamu, Kenya and was initially schooled in Kenya and India. He obtained his BA and BComm in Belgaum, India and later obtained a BEd at the then newly-formed University of Lethbridge – part of its second graduating class in 1969.
Menino and Amalia were married in Kenya in 1962. In 1965, the family immigrated to Canada, became citizens and made Canada their new home.
His vocation was as an educator. He worked as a teacher for 8 years at the Goan High School in Mombasa, Kenya, during which time he also coached the debate club and the soccer team. After immigrating to Canada, he and Amalia taught for 23 years at St Mary’s High School on the Kainai Blood Reserve where Menino taught a number of subjects including English, Math and Business Studies.
His personal interest in sports included badminton, table tennis and cricket; he was also an ace carrom player. He played the violin and listened to classical music. He was an avid reader with a keen interest in world issues and enthusiastically discussed politics with friends and family.
Menino had a strong sense of civic duty. For several years he served as the treasurer of St Theresa’s Catholic Parish in Cardston. Each year, he gave his time to the Community Volunteer Income Tax Program, where he and Amalia helped senior citizens with their taxes. He was also a member of the Lethbridge branch of the Independent Order of Odd Fellows.
The family is grateful to Drs David Stewart, Eric Wilde and William Shields for Menino’s care over the past several years. We also thank Dr Shukkoor and the Palliative Care Team at the Chinook Regional Hospital as well as the staff at St Therese Villa.
A private family Funeral Service has been held.
In lieu of flowers, donations can be made to the Jack Ady Cancer Centre, c/o Alberta Cancer Foundation, 1A129, 960 19th Street South, Lethbridge, AB T1J 1W5.
Send condolences at www.mbfunerals.com.
Martin Bros. Funeral Chapels Ltd.
610 – 4 Street South
Lethbridge, AB T1J 4P3
Phone: (403)328-2361 Fax: (403)382-3623
Toll Free: 1-800-382-2901
www.mbfunerals.com