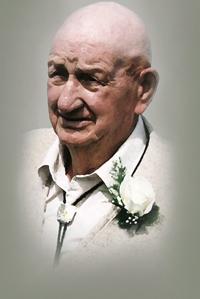 RODERICK THOMAS ROGERS, better known as Rody Rogers or just R.T., passed away from pneumonia, surrounded by his family on September 12, 2012 at St. Michael’s Health Center. He was born on January 25, 1927 in the house that he resided in on a farm west of Nobleford until a few months before his passing. In 1951 he married Marguerite Dunlop and together they raised 5 children.
Rody will be fondly remembered as a caring and concerned father offering all kinds of practical advice to his now adult children. He was equally passionate about farming and took an active interest in the daily events on the family farm. Rody will also be remembered for his good sense of humor and as good friend to many within the farming community around Nobleford.
Rody participated in community life by driving school bus for 27 years. He was also a 4-H Club leader for 15 years. In his retirement, he made daily visits to the Nobleford Coffee Shop where he exchanged views around local, national and international news. He prepared for these visits by reading 3 newspapers per day.
Rody is survived by his 3 sons and 2 daughters: Tom (Brenda), Bob, Stuart (Paula), Roberta Rogers and Diane Paul. He leaves behind 4 grandchildren: Mark (Alyshia), Cindy, Ethan and Kaitlynn Rogers and 2 great-grandchildren: Makaylee and Cowan Rogers.
Rody was predeceased by his wife, Marguerite in 1984, sister-in-law, Robina Dunlop in 2006, son-in-law, Doug Paul in 2010 and his four legged best friend and companion for many years, Buster in 2012.
Rody’s family wish to express their thanks to the compassionate care he received from the staff at St. Michael’s Health Center during his stay there, his longtime doctor, Dr. Sommerfelt, and all the homecare staff who attended to his needs while he lived at home.
A Funeral Service will be held at 1:30 pm on Tuesday, September 18, 2012 at MARTIN BROTHERS RIVERVIEW CHAPEL, 610 – 4 Street South, Lethbridge. Interment to follow in the Mountain View Cemetery.
Flowers are gratefully declined. If friends wish, they can contribute to St. Michael’s Health Foundation, 1400 – 9 Ave South, Lethbridge, AB T1J 4V5.
As a final tribute to Rody, tell someone you know that you love them today, while you still have the chance to.
Send condolences at www.mbfunerals.com.
Martin Bros. Funeral Chapels Ltd.
610 – 4 Street South
Lethbridge, AB T1J 4P3
Phone: (403)328-2361 Fax: (403)382-3623
Toll Free: 1-800-382-2901
www.mbfunerals.com