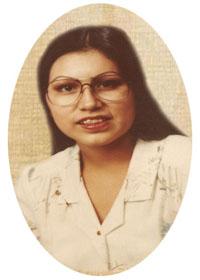 Born April 6, 1958, Cardston, Alberta
Shelley was raised by her parents Melvin Sr. and Louise Many Grey Horses on the Blood Reserve and attended St. Mary’s Residential School. The family left the reserve in the 1960’s, as her father worked in and around southern Alberta on various farms, the Many Grey Horses’ children attending various schools off the reserve.
Her biological father was Leonard Weasel Fat, who passed away when she was young and Melvin Sr. adopted her and raised her as a Many Grey Horses. My sister is and always will be a Many Grey Horses, just like the rest of her seven brothers and sisters, who are proud to carry the name.
After Shelley finished her education in high school, she worked with the Blood Tribe Administration in various departments, including Social Services. She worked with Everett Soop, one of her favorite uncles, (a respected and beloved cartoonist and journalist at Kainai News). She travelled across Alberta, Canada and to the United Kingdom, fighting on behalf of native rights. She met with her friend prime minister Tony Blair in the U.K. on her travels to advocate for treaty rights and the honorable Mr. and Mrs. Ralph Klien. She worked with and Treaty Six and the Department of Indian Affairs in Edmonton as a consultant for various corporations, such as Treaty Seven. She had her own consultant business.
Shelley raised three children, Jody-Bradley, Dana Chief Body and Shawn Many Grey Horses. Both pursued careers as police officers and gold medalist boxers, which she is very proud of. Then she left to pursue her education at both the University of Calgary and Lethbridge, earning her degrees and then turned to teaching full-time, which she continued until this last spring semester, despite her cancer and sickness.
She was an active member of her church, the Church of Jesus Christ of Latter Day Saints. But she still respected the old traditional spiritual ways of being an Indian, like her grandparents Alphonse Sr. and Ruth Many Grey Horses. Shelley loved fashion, sewing, making her own clothes, beadwork, as well as learning different arts and crafts. She was an avid mac computer user and learner of the latest technology. She did research on native rights and issues for various government departments. She always continued with her education pursuits and never stopped learning as much as she could about any subject she was passionate about. As well as writing proposals, business plans and research, she volunteered with many non-profit organizations wherever she lived. She was very interested about her genealogy, her heritage and family. She loved country music, going to rodeos, powwows, the Sundance on the reserve and native social gatherings across Alberta. Her friends the “Cowgirl”.
Shelley is survived by mother Louise Fox and stepdad Norbert Fox. Grandmother May Weasel Fat. Sons, Jody-Bradley (Amanda) Chief Body and Dana (Lois) Chief Body, Shawn (Mary) Many Grey Horses. Grandchildren Tatum (and another grandchild on the way), Sky, Raymee, Iyeala, Gracie. Sister Tamie (Jacky Bruno), Tina and Louise Weasel Fat, Brothers Norbert Many Grey Horses, Vincent (Cathy) Many Grey Horses. Adopted brothers Eldon (Levina) Weasel Child, Winston Bruised Head, Les, Shalles Wolf Child. Uncles Pete Standing Alone, Alfred Standing Alone, Mervin Brave Rock. Favorite uncle Andy (Erma), Kevin, Rusty, David, Ervin, Clement, Phillip Striped Wolf, Clarence, Daniel, Roy, Justin, Vern Weasel Fat. Aunties Sophie Tailfeathers, Nita Wells, Ruth McLonaghan, Bertha (Homer), Donna, Mary, Geraldine, Maxine Weasel Fat. Special friend Andrew Hunt. Close relative and friend Gerri Many Fingers and Helen Many Fingers. Roy and Patty Fox, Angie Fox. Nephews and nieces: Myles, Kris, Joey, Sheena, Olivia, Sophie, Matthew, Joe, Andrea, Chantelle, Clarrisa.
Predeceased by her father Leonard Weasel Fat and Melvin Sr. “Popcorn” Many Grey Horses. Brothers Melvin “Dewy” Many Grey Horses, Travis John Many Grey Horses, sister Brenda Ruth Many Grey Horses. Mannie Thompson, Mary White Quills, Mrs. Rides-At-The-Door, Mrs. “Widow” Striped Wolf Auntie Fay Weasel Fat, Dan Weasel Fat, Harold Striped Wolf, Ruby & Pete Gross Ventre Boy, Chris & Susie Strangling Wolf, Dwaine Black Rabbit, Nick and Janie Cecilia Striped Wolf, Mr. & Mrs. John Many Chief, Andrew Wolf Child, Max Weasel Fat, Mr. & Mrs. John Striped Wolf, John Aterton Numerous family and relatives, as well as friends from the Blood Reserve and Lethbridge and non-native friends from the southern Alberta area.
Our sister was a kind-hearted caring person who loved her family dearly, was especially fond of her younger siblings, as she helped in raising and nurturing them. Shelley was a deeply spiritual person and always took time to help others, was a great listener and advisor to those closest to her. Strived in her educational pursuits, encouraged her own younger brothers and sisters to do the same. She was greatly influenced by her Grandparents Alphonse and Ruths’ traditional spiritual beliefs, ways, values and guidance. We will miss you dearly sister and will always remember you for your talents, intellectual abilities, beauty and being a compassionate caring mother, sister and daughter. Your loving brother, Norbert Many Grey Horses.
Family Service will be held at CORNERSTONE FUNERAL HOME, 2800 Mayor Magrath Drive South, Lethbridge on Thursday, September 27, 2012 at 4:00 P.M.
Wake Services will be held at CHIEF MOUNTAIN CHAPEL, Cardston, Blood Reserve on Thursday from 6:00 P.M. to 11:00 P.M.
A Funeral Service will be held at SENATOR GLADSTONE HALL, Blood Reserve on Friday, September 28, 2012 at 11:00 A.M. with Reverend Michael Tipper officiating.
Interment to follow at St. Mary’s Cemetery.
Honoured to Serve
Cornerstone Funeral Home & Crematorium
2800 Mayor Magrath Drive South
Lethbridge, Alberta T1K 7B1
Telephone ~ (403) 381-7777
Fax ~ (403) 381-3128
Toll Free ~ 1-(888)-381-7778
care@cornerstonefh.ca

Harlan Waddle
1932 – 2012
Harlan Gordon Waddle, beloved husband of Pat Waddle, passed away in
Lethbridge on Thursday, September 20, 2012 at the age of 79 years.
A private family burial service will be held at the Vauxhall Cemetery prior
to the funeral service on Saturday, September 29, 2012.
The Funeral Service will be held at the Royal Canadian Legion, 217 – 5
Street North, Vauxhall on Saturday, September 29, 2012 at 2:00 P.M.
Condolences may be forwarded by visiting our website at
www.southlandfuneral.com.
Besides Pat, his loving wife of fifty nine years, Harlan is survived by
their four sons Keith Waddle of Magrath; Lane Waddle of Medicine Hat; Lyle
Waddle of Lethbridge; Dean (Connie) Waddle of Scandia. He will be fondly
remembered by his grandchildren Jamie (Martha) Waddle and son Alex; Sheila
(Robert) Stemberger and children Mya, Owen and Adam Harlan; Shawn Higa and
his mother Bev Higa. Harlan is also survived by sister-in-law Myrna Waddle,
aunt Effie Burge and numerous nieces and nephews. Harlan will also be fondly
remembered by the extended Waddle and Broderson families and by Pat’s family
Jack Connor, Edith (Austin) Jorgensen, Dorothy (Dale) Rombough, Tom Connor,
Linda Connor and their families.
He was predeceased by his parents Glenn and Marie Waddle; two brothers and
sister-in-law Milton (Jean) Waddle and Ken Waddle; sisters-in-law Jean
Waddle and Isabel Connor; niece Dalene Rombough, nephew Kevin Waddle and
many aunts and uncles.
Harlan was born in Retlaw on December 3, 1932. He married Patricia Connor
on July 24, 1953. In 1961 they moved their family to Taber where Harlan
worked in the Laboratory at the Sugar Factory and in 1975 they moved to
Lethbridge where he was employed with Canbra Foods for twenty years. Harlan
enjoyed his years at Canbra Foods as the agriculture department he oversaw
expanded to include the three prairie provinces, Montana, Idaho and
Washington. He enjoyed the personal contacts, extensive travel and further
education during that time. In 1996 he became manager of Southern Alberta
Research. Shortly after, a severe case of shingles changed the state of his
health completely.
Highlights in Harlan’s life included times with his family, both immediate
and extended. He recalled fondly the family reunions they would attend,
special Christmases and the annual fishing trips to Vancouver Island with
old friends over the course of thirty years.
Harlan was a gentle man who loved life. His gentle sense of humour and
thoughtful nature will be dearly missed. Rest in Peace.
Arrangements in care of Southland Funeral Chapel, Taber. Telephone: (403)
223-8778.

WILKINSON
Dorothy Wilkinson of Taber passed away in Lethbridge on Tuesday, September 25, 2012 at the age of 75 years. Dorothy was born to Alexander Busse and Emma Schwartz on June 10, 1937 on their farm in Hallonquist District, Saskatchewan. She started her schooling at Wiva View, where she drove the horse and buggy to school by herself. She also attended Hallonquist School. She graduated from Swift Current Collegiate, where she had taken a commercial course in shorthand and typing. In Swift Current, her first job was as a teller at the TD Bank. She also worked in Swift Current as a secretary at Schlumberger. Dorothy was married to Dwight Wilkinson on November 3, 1962 after they had dated for about three years. They moved from Swift Current to Medicine Hat in 1967 and then to Taber in 1969. She spent some of her days as a housewife, caring for their children, who fondly remember her cooking. She did secretarial work for her husband’s law practice from 1969 until he retired in 1988. During her time in Taber, she also worked for Roy Hirch, Dodic Toone Maclean and for North & Company LLP from 1998 until she retired in January 2008. She enjoyed bowling, cooking, gardening and visiting with her neighbours. Dorothy was a dedicated member of the 67 Unit of the UCW at Knox United Church in Taber. Her family, friends and neighbours remember her witty sense of humour and her caring nature. She was predeceased by her beloved husband Dwight in 2005. She is survived by her 3 children; Heather Russell, Kerilee (Alex) Petrie, and Greg Wilkinson; brothers, Marvin (Norma) Busse, Dale (Yolanda) Busse, and Larry (Caroline) Busse. Funeral services will be held on Saturday, September 29 at 4:30 PM from Knox United Church in Taber. Reverend Sandra Riddell officiating. In memory of Dorothy, if friends desire, memorial tributes may be made to St. Michael’s Health Foundation, 1400 9 Avenue South, Lethbridge, Alberta, T1J 4V5. Arrangements in care of THOM’S FUNERAL HOME AND RECEPTION CENTRE, DUCHESS. For more information please visit www.thomsfuneralhome.com or call (403) 501-1010.