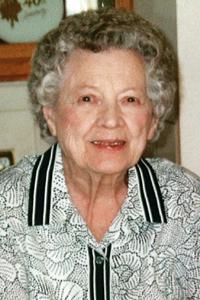 MRS. NELLIE LEONA BAIR of Milk River, beloved wife of the late Mr. Alva C. Bair, passed away after a lengthy battle with Kidney Failure, on Tuesday, September 25, 2012 at the age of 94 years.
Nellie was predeceased by her husband, Alva C. Bair in March of 1999, a sister Thelma Stevens in January 2010, a sister Myrtle Kingsbury in 1926. She is survived by her son Ronald (Joyce), daughter Lorna, sister Doris (Miles) Adam and numerous nieces and nephews.
Nellie was born on March 7, 1918 at Lucky Strike, AB. She received her education grades one through ten at Lucky Strike, then at Lethbridge Collegiate Institute. Nellie helped run their General Store and was assistant Post Master. She was married on October 7, 1943 and lived on Alva’s farm home in the 215 District before moving to a new home in Milk River in 1990. She travelled on many hunting and photography trips with her husband throughout the world. Over a period of 25 years thousands of visitors came to the farm home to see the “Bair Museum” and see slides of their trips. Nellie always had refreshments and homemade cookies and squares to serve their guests. She was an active member of St. Paul’s United Church, beginning as secretary treasurer, and clerk at session and member of UCW since 1944. She was also a longtime member of the Sleepy Hollow Community Club.
A Funeral Service will be held at 11:00 am on Monday, October 1, 2012 at the ST. PAUL’S UNITED CHURCH, 201 – 2 Ave NE, Milk River, with Reverend Sarah Wallace officiating.
In lieu of flowers memorial donations may be made in Nellie’s name to the Milk River and District Health Care Centre, PO Box 90, Milk River, AB T0K 1M0.
Send condolences at www.mbfunerals.com.
Martin Bros. Funeral Chapels Ltd.
610 – 4 Street South
Lethbridge, AB T1J 4P3
Phone: (403)328-2361 Fax: (403)382-3623
Toll Free: 1-800-382-2901
www.mbfunerals.com