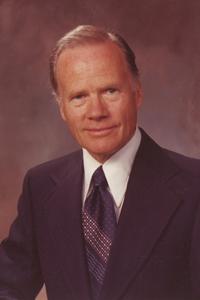 LLOYD WALLACE JOHNSTON of Lethbridge, beloved husband of Jessie Johnston for 67 years, passed away on September 5, 2012 at 95 years of age.
Lloyd was born in Calgary on March 7, 1917. He spent most of his youth on a dairy farm in Springbank west of Calgary.
He moved to Edmonton where he studied medicine at the University of Alberta and trained as a Royal Canadian Medical Corps officer. Lloyd graduated as a Medical Doctor in 1944 and on May 23, 1945, he married his lifelong partner Jessie.
In 1950 Lloyd completed his Obstetrics and Gynecology Fellowship at Queen’s University in Kingston, Ontario. As a specialist he began his 42 year long career at the Haig Clinic and became chief of staff in Obstetrics and Gynecology at the then Municipal Hospital. In 1955 he took a sabbatical to teach at the Nuffield Department of Obstetrics and Gynecology of the Oxford Medical School.
Lloyd was a senior life member of the Royal College of Surgeons of Canada, the American College of Surgeons and the American College of Obstetrics and Gynecology. He served on several committees at the College of Physicians and Surgeons of Alberta and on the University of Lethbridge Senate. He was actively involved in the United Church and in Kiwanis. He enjoyed curling, golf and gardening and was an avid football, hockey and baseball fan. He was a dedicated, loving father to five daughters.
Lloyd is survived by his wife Jessie and his daughters Lynn, Pat, Marcia, Rae, Pam and their spouses. He also is survived by his grandchildren Catherine, Court, Erik and Tim; his great grandson Midnite; his two nieces Ann and Erin and his nephew Clayton and their families.
Lloyd was predeceased by his brothers Hartley and Barry; his daughter Susan; his parents Ethel and Raymond; and his sister Shirley.
A Memorial Service will be held at 1:00 PM on Friday, October 5th, 2012 at MCKILLOP UNITED CHURCH, 2329 15 Ave South, Lethbridge with Reverend Trevor Potter officiating.
Flowers are gratefully declined. Those who wish, memorial donations may be made to the University of Alberta, Medical School, Medicine Scholarships and Bursaries. www.giving.uofalberta.ca
Send condolences at www.mbfunerals.com.
Martin Bros. Funeral Chapels Ltd.
610 – 4 Street South
Lethbridge, AB T1J 4P3
Phone: (403)328-2361 Fax: (403)382-3623
Toll Free: 1-800-382-2901
www.mbfunerals.com