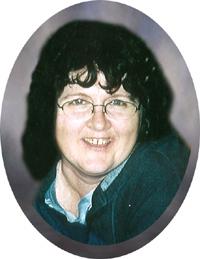 MRS. KATHY ANN BRODERSON, beloved wife of Mr. Brent Broderson, passed away at the St. Michael’s Palliative Care Centre, on Thursday, October 25, 2012 at the age of 54 years, following a lengthy battle with cancer.
Kathy was born in Calgary, AB on July 1, 1958 and at a very young age lived in P.E.I. for 5 years.
She then came back to live in Calgary in 1963 and in 1981 moved to Lethbridge. Brent and Kathy met in 1996 and were married July 15, 2000, Kathy worked for a few years at CIBC and TD Banks and in 2002 started working at the Lethbridge Regional Hospital in the Food Services Division, while at the same time helped Brent with their business, Chinook Country Moving Company Ltd. Many co-workers became long time friends.
Kathy is survived by a brother Charles (Ellen) Heater and their family, Tara (Cam) and Dustin Heater, and special aunt Elsie Magrath. She is survived by son Gord (Alyssa) Kayden and Kingston Anderson, step daughter Dawn (Bob) Anna, Riley, Wyatt, and Duncan and stepson James (Jac) of Winnipeg, along with Brent’s kids Brad (Kim) Bryce and Brayden. Jason and son Cohen, plus numerous family and friends in BC, AB, SK, MB, ON, as well as many aunts, uncles, and cousins in P.E.I and Alberta
She is survived by Brent’s mom Ethel Broderson and family Bryan (Donna) Broderson, Bruce (Kathy) Broderson, Brenda (Garry) Gillespie, Terry (Trina) Broderson and their families.
Kathy was predeceased by her parents Mildred and Vaughn, step-father Elmer Heater, grandparents, father-in-law Lloyd Broderson, niece Robin Broderson, as well as 7 aunts and uncles and 2 cousins.
A Celebration of Life will be held at McKILLOP UNITED CHURCH 2329 – 15th Avenue South, Lethbridge, AB on Monday, October 29, 2012 at 2:00 P.M. with Reverend Aldeen McKay officiating.
In lieu of flowers, memorial donations may be made to the Canadian Cancer Society Driver Program, Suite 200, 325 Manning Road NE, Calgary, AB. T2E 2P5.
Honoured to Serve
Cornerstone Funeral Home & Crematorium
2800 Mayor Magrath Drive South
Lethbridge, Alberta T1K 7B1
Telephone ~ (403) 381-7777
Fax ~ (403) 381-3128
Toll Free ~ 1-(888)-381-7778
care@cornerstonefh.ca