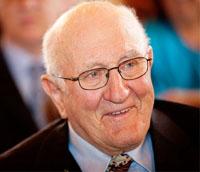 Jozef (Joe) Poppe
Joe Poppe loving husband of the late Abby Poppe passed away peacefully on October 26, 2012. Joe was born in Kieldrecht, Belgium on October 30th, 1928. He was the youngest of 7 children. He married the love of his life Abby on September 21, 1954 and together the came to Canada in April of 1959 .In 1969 their dream of owning a farm was realized when the bought their farm west of Picture Butte. Joe and Abby ran their dairy farm together for many years. Joe and Abby retired to their acreage where he lived until this past January.
Joe was predeceased by his loving wife Abby in 1998.They have now be reunited as they were never apart before and now will never be apart again. He was also predeceased by his parents , 3 brothers and 1 sister.
He is survived by his children Marlene (Joe) Stroeve, Alfons (Freda) Poppe, and Helen Poppe.
He also leaves behind his loving grandchildren Michael (Gisele) Stroeve, Tanya (William) Slomp, Angie (Mark) VanZeggelaar, Jackie (Jason) Kraemer, Christine (Mike Schafer), Michelle (Jason) Belcourt, Ryan (Ashlee) Poppe, and Randy (Breanne Jones) Poppe.
and great grandchildren Rylan, Kyler, Mylee Stroeve, Ethan, Ella, Clara, Liam ,Liza Slomp, Matthew VanZeggelaar, Jaxon Kraemer, Abby, Eric Schafer, Austin, Zachary Belcourt, Haylee Poppe.
He is also survived by 2 sisters in Belgium and numerous nieces and nephews in B.C, Holland and Belgium.
Grandpa as we all called him loved to travel with Grandma and they shared many wonderful trips and memories together. His greatest joy was his family as he would sit and visit with each and everyone of us. The last few years his great grandchildren would always bring a smile to his face as he could watch them for hours playing and talking to him. He never forgot any of their names and would always tell you what he cherished about each of them.
Honoured to Serve
Cornerstone Funeral Home & Crematorium
2800 Mayor Magrath Drive South
Lethbridge, Alberta T1K 7B1
Telephone ~ (403) 381-7777
Fax ~ (403) 381-3128
Toll Free ~ 1-(888)-381-7778
care@cornerstonefh.ca

No Condolences for “POPPE Joe”