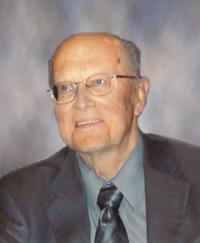 COLIN WHITLOCK, of Lethbridge, passed away on October 26, 2012 at the age of 81 years.
Colin was born February 23, 1931, in Medicine Hat, AB. The family had homesteaded in Suffield, and then moved into Vauxhall.
Colin went to school in Vauxhall, staying with his aunt Josie Dewhurst and riding the train home to the family farm at Ronalane on weekends. Early jobs included rounding up horses with an old cowboy who still wore a gun on his hip. Colin became a mechanic, working at his brothers garage, and drove school bus where he saw the new school teacher, Patricia Sparks walking by, and they were married on November 17, 1951. Colin owned a Texaco service station in Lethbridge, the family farm at Ronalane, a farm at Hays, and then retired in 1988. Colin and Patricia moved to Lethbridge and have lived there since.
Colin is survived by his wife of nearly 61 years, Patricia; his son Terry and wife Sharon; son Alan and wife Marlene; his brother Bob and wife Fay. He has two grandsons, Wesley, Wade and wife Ashley Whitlock, and a great grandson Grayson, as well as nieces and nephews. Colin had many close friends, both young and old.
Colin was an active Jehovah’s Witness since his teenage years and had many responsibilities within his congregation. He will be dearly missed.
A Service of Remembrance will be held at CORNERSTONE FUNERAL HOME, 2800 – Mayor Magrath Drive South, Lethbridge, on Wednesday, October 31, 2012 at 1:00 P.M.
Honoured to Serve
Cornerstone Funeral Home & Crematorium
2800 Mayor Magrath Drive South
Lethbridge, Alberta T1K 7B1
Telephone ~ (403) 381-7777
Fax ~ (403) 381-3128
Toll Free ~ 1-(888)-381-7778
care@cornerstonefh.ca

No Condolences for “WHITLOCK Colin”