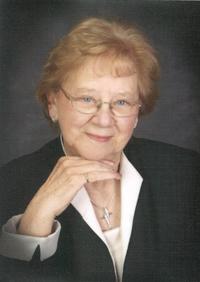 It is with great sadness we announce the passing of our Mother, Grandmother and Great Grandmother, EFFIE KRAMER, beloved wife of the late Simon “Sam” Hendrikus Kramer of Lethbridge, on Monday, October 29, 2012 at the age of 80 years.
Effie is survived by her seven children; Simon (Maureen) Kramer and their family, Jennifer (Jason) Drader and Daphne (Ryan) Mastel; Coby (Dwayne) Baczuk, John Kramer, Gerry (Chris) Kramer and their family, Jeremy (Chelsea) Kramer, Bryan (Kelsey) Kramer and Jeff (Aryn) Kramer; Mary-Ann (Denis) Vervoot and their family, Samantha Vervoort, Ashley (Dave) Peters, Denis Vervoort and Tracey Vervoort; Jack (Susan) Kramer and their family, Melissa Kramer, Jesse Kramer and Alexandra Kramer, and Leona (Terry) Anton and their family, Nicole Anton and Christopher Anton. As well as eight great-grandchildren, McKenna Drader, Vance, Nate and Raeleigh Kramer, Ethan Vervoort, Tristen and Everly Peters and Coltyn Reimer.
We would like to acknowledge Pete Theriault for being a part of our family and most importantly a wonderful companion for our mom over the past 11 years.
She was predeceased by her parents Jan & Coba de Boer, Sam’s parents, Simon & Maria Kramer, brother Peter de Boer, niece Carla, five brothers in law and a sister in law.
Effie was born on October 29, 1932 in Heerhugowaard, The Netherlands and was the 2nd child of 15 to Jan & Coba de Boer. As she got older she took care of her younger sisters and brothers and also worked in the family grocery store. She married Sam on May 20, 1954 and that year, boarded a ship and headed across the ocean for their honeymoon and a new life in Canada. They arrived in Saskatchewan and a year later moved to Southern Alberta to farm, raise a family, and later settle in Grassy Lake in 1977. After Sam’s passing, she moved to Lethbridge in 1991 where she spent the rest of her life. She took many trips back to Holland, where she shared some of these with her children, as the love of her family was very near and dear to her heart.
Some important aspects of Mom’s life were her family, her faith and her gardening. She was a member of the C.W.L. and was continually involved in the St. Martha’s Parish, volunteering her time whenever she was needed. It was said that if Effie was around, nobody needed to worry!
After moving from the farm, she worked at Green Haven for 12 years and enjoyed working with a great bunch of ladies. She was a devoted wife, mother, grandmother, great grandmother and friend whom you could always count on to be there when you needed. The world was a better place because she was in it. Mom enriched our lives, our memories of her will forever stay in our hearts.
Prayer Services will be held at ST. MARTHA’S CATHOLIC CHURCH, 355 Columbia Boulevard West, Lethbridge, AB on Sunday, November 4, 2012 at 5:00 P.M.
A Funeral Mass will be Celebrated at ST. MARTHA’S CATHOLIC CHURCH, 355 Columbia Boulevard West, Lethbridge, AB on Monday, November 5, 2012 at 11:00 A.M. with Father Fernando Genogaling, Celebrant.
Interment to follow in the Mountain View Cemetery.
In lieu of flowers, memorial donations may be made to the Alberta Children’s Hospital, 2888 Shaganappi Trail NW, Calgary, AB, T3B 6A8.
Honoured to Serve
Cornerstone Funeral Home & Crematorium
2800 Mayor Magrath Drive South
Lethbridge, Alberta T1K 7B1
Telephone ~ (403) 381-7777
Fax ~ (403) 381-3128
Toll Free ~ 1-(888)-381-7778
care@cornerstonefh.ca

No Condolences for “KRAMER Effie”