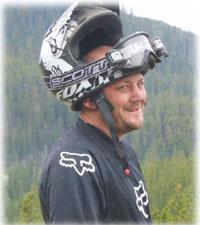 William Douglas McCormick “Billy” of Lethbridge AB passed away peacefully on Tuesday October 30, 2012, at the age of 33.
Billy was born in Lethbridge Alberta on October 10, 1979. Billy was raised and attended school in Coaldale. He is survived by his son Mitchell McCormick of Raymond, his fiancé Amber Yanke, parents, Heather Thomas and Doug McIntosh of Coaldale, Gary and Sherry McCormick of Arizona, his sister Tracy McCormick (Michael Frankson), and her children Shay-lynn, Brooke, and Marcus all of Toronto. He is also survived by his Grandparents Peggy McCormick of High River and Eldon Thomas of Portage MB, as well as numerous Aunts, Uncles, Cousins and friends.
At the time of Billy’s passing he was employed at Mustang trailers as a fabricator /welder. Billy was a hard worker and took pride in all that he did. If there was ever something that needed to be fixed or built, Billy could do the job without hesitation. He loved dirt biking, quading, and spending time in the mountains camping with his son and numerous friends. The highlight of this past summer was a special camping trip he took with Mitchell and his mom Heather and Doug.
A Celebration of Life will be held at CORNERSTONE FUNERAL HOME – 2800 Mayor Magrath Drive South, Lethbridge, AB, on Monday, November 5, 2012 at 2:00 P.M. with Rev. Trevor Potter Officiating.
In lieu of flowers, Memorial donations in Mitchell’s name may be made at Alberta Treasury Branch.
Honoured to Serve
Cornerstone Funeral Home & Crematorium
2800 Mayor Magrath Drive South
Lethbridge, Alberta T1K 7B1
Telephone ~ (403) 381-7777
Fax ~ (403) 381-3128
Toll Free ~ 1-(888)-381-7778
care@cornerstonefh.ca