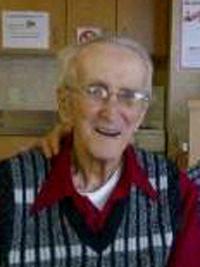 After a long and dignified battle with Alzheimer’s disease, Dad passed away peacefully on October 28, 2012 at Taber’s Long Term Care Facility. Dad was predeceased by his father Albert Watmough and mother Mable Crowe, brothers Roy Watmough, Harvey Watmough, Albert Watmough, and sister Doris Pearson. Dad was also predeceased by sisters-in-law Shirley Watmough and Eileen Watmough and brother-in-law Norm Pearson. He was also predeceased by numerous nephews and nieces.
Dad will be missed by his children Gayle (Jack) Kwantes of Vancouver, BC, Don Watmough of Peterbrough, Ont, Tracy Watmough of Peterbrough, Ont, Step son Rick (Lynn) De Long of Belleview, Ab, Kimberly Watmough of Peterbrough, Ont and Cynthia Watmough of Lethbridge, Ab. Dad is survived by several grandchildren and great grandchildren. Dad also leaves behind to morn his passing brothers Chet (Judy) Watmough of Winfield, BC and Alvin (Ida) Watmough of Okotoks, Ab. Dad also leaves behind his beloved nephews and nieces.
Dad was born in Lethbridge, Ab in Galt Garden’s hospital on September 15, 1925. He was a precocious child who displayed a knack for quick witted answers and practical jokes, much to the chagrin of his teachers. After leaving school at an early age, Dad helped, along with his brother Harvey, to tend to his maternal grandmother and grandfather. Dad’s lifelong love of vehicles began at an early age as he drove taxi and Greyhound bus. Just prior to joining the army, Dad worked in the Shaughnessy coal mine. After his discharge from the army, Dad went back driving taxi until he started his lifelong passion of being a truck driver. Dad helped to pioneer long haul trucking from the West to the East and had to drive on roads that were less than desirable. He was proud of the fact that he had driven through most of North America. Once he retired he focused his attention of his other passion of repairing his vehicles, as well as helping family with their cars. Despite not having any formal training in mechanics, Dad was able to rebuild motors and transfer a motor from one vehicle to another, until sadly the disease Dad so valiantly fought took away this love. Dad also loved music and often could be heard singing or whistling along to his favorite songs and continued to do so even as his memory began to increasingly fail him.
Dad’s big smile and humorous nature will be sadly missed by all those that knew and loved him. His children and grandchildren will also miss his words of wisdom. Dad you will be always loved and forever remembered by all those that loved you.
In lieu of flowers, donations can be made to: Taber and District Health Foundation, Attention to the Long Term Care Unit 4326 50th Ave Taber, Ab T1G 1N9 the Alzheimer Society Suit 402 740 4th Ave South Lethbridge, Ab, T1J 0N9
Or Attention: Alan MacKenzie Veterans’ Affairs Canada, Emergency Fund PO Box 7700, Charlottetown, PEI, C1A 8M9.
Visitation will be held at CORNERSTONE FUNERAL HOME, 2800 – Mayor Magrath Drive South, Lethbridge on Friday, November 9th, 2012 from 6:00 PM to 8:00 PM.
The funeral service will be held at CORNERSTONE FUNERAL HOME on Saturday, November 10th, 2012 at 1:00 PM, with Reverend Allan McCuaig officiating. Cremation to follow.
Honoured to Serve
Cornerstone Funeral Home & Crematorium
2800 Mayor Magrath Drive South
Lethbridge, Alberta T1K 7B1
Telephone ~ (403) 381-7777
Fax ~ (403) 381-3128
Toll Free ~ 1-(888)-381-7778
care@cornerstonefh.ca