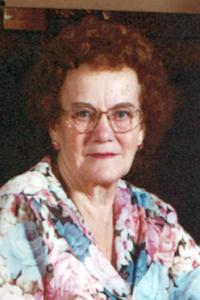 MRS. HELEN RONCERAY of Lethbridge, beloved wife of the late Mr. Marcel Ronceray, passed away peacefully on Wednesday, November 7, 2012 at the age of 85 years.
Helen was born in Tuttle, North Dakota and grew up in St. Paul, AB. She was married on June 24, 1950 in Vancouver, BC and moved to Grassy Lake in the early 1950’s. It was there that Helen and Marcel raised their family until moving to Lethbridge in September 2005. They spent many hours dancing at the Grassy Lake Community Hall and surrounding areas. After Marcel’s death in May 2008, her health declined rapidly where she went from St. Therese Villa to Edith Cavell Care Centre. Helen enjoyed dancing, sewing, gardening, cooking, baking, and feeding her 50 cats while living in Grassy Lake. She also enjoyed going for coffee after Marcel’s death with her son Albert and grandson, Shawn at Tim Hortons.
Helen is survived by her daughter JoAnne (Richard Kambeitz) and her children Shawn, Scott (Leslie), Bryan (Jenn) and Bradley Wensmann and grandchildren Aiden and Conner and Madelynne (first child born to Bryan & Jenn born 90 minutes after Helen’s death); son Albert Ronceray; daughter Paulette (Gordon) Fletcher and their children Ashley (Mike Gray) and Felicia; as well as numerous nieces, nephews and their families. She was predeceased by her parents, sisters Leona, Marie and Anne.
Family and friends are invited to pay their respects between 12:00pm and 12:45pm followed by a Funeral Service at 1:00pm on Friday, November 9, 2012 at MARTIN BROTHERS RIVERVIEW CHAPEL, 610 – 4 Street South, Lethbridge.
Send condolences at www.mbfunerals.com.
Martin Bros. Funeral Chapels Ltd.
610 – 4 Street South
Lethbridge, AB T1J 4P3
Phone: (403)328-2361 Fax: (403)382-3623
Toll Free: 1-800-382-2901
www.mbfunerals.com