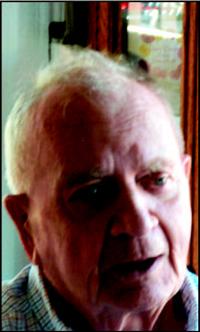 1927 – 2012
Emerson Charles Wright, beloved husband of the late Elsie Wright, passed away in Taber on Thursday, November 29, 2012 at the age of 85 years.
Emerson is survived by his loving daughter Shirley (Barry) Doble of Brooks and their children Jason Wright and Chad (Michelle) Doble; great grandchildren Caleb and Damian; sister-in-law Loreen Wright of Medicine Hat; his dear friends Doug Leong, Rhonda and Jim Culver as well as many nieces and nephews.
Emerson was born in Medicine Hat on September 27, 1927, one of seven children born to Frank and Hannah Wright. He started his teaching career in various rural communities. Emerson settled in Vauxhall and taught at the Vauxhall High School, where he was the vice principal for twenty nine years. After teaching he went on to manage the Vauxhall Legion for ten years until his retirement in 1994.
Emerson looked forward to the challenge of doing the crossword puzzle in the morning paper. He also loved to tell a good joke or two.
No services are planned. Emerson will be privately remembered by his family and friends.
The family of Emerson would like to thank everyone at the Taber Health Centre for the outstanding care he received during his fifty nine days there. Also a special thank you to Dr. Jillian Demontigny, Dr. Rob Wedel and the nursing staff for making his last days very enjoyable.
If friends so desire, memorial tributes in Emerson¹s name may be made directly to the Canadian Diabetes Association, 204, 2323 – 32 Avenue NE, Calgary, Alberta T2E 6Z3.
Arrangements in care of Southland Funeral Chapel, Taber. Telephone: (403) 223-8778.

No Condolences for “WRIGHT Emerson”