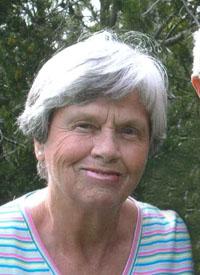 LILY JAMES (nee Skerratt), beloved wife of the late Larry James of Magrath, passed away on Thursday, November 29th, 2012 in Lethbridge, Alberta at the age of 84 years.
Lily was born in Edmonton, Alberta, on October 14, 1928, second youngest of ten children, born to Richard and Emma Skerratt. Lily spent an idyllic childhood in the midst of tough times in a home she cherished. By age 15, Lily was working at Eaton’s in Edmonton, dressing windows and serving ex- servicemen at the candy counter. Larry James spent a lot of time at Eaton’s candy counter wooing Lily relentlessly. He prevailed, and they were married on August 31st, 1946. Together they raised six children as they moved from Edmonton to Calgary to Vancouver to Australia to Idaho, and finally home to Magrath. In 1985, Larry and Lily built a new home in Magrath on the large corner lot where Larry’s childhood home once stood. The family grew to include 26 grandchildren and 31 great grandchildren, and visiting family were a constant and welcomed fixture in Larry and Lily’s retirement home. In her fifties, Lily contracted a rare degenerative disease of the muscles, which she struggled with mightily. It is a tribute to her ongoing strength and courage that she was able to enjoy an eventful and fulfilling life until very recently. Babies and young children were a source of special joy to Lily. She was happiest in the midst of the youngest members of her very large family.
Larry and Lily spent 58 happy years together before his passing in August of 2004.
She is survived by her sons Dennis (Janet) of Mill Bay B.C., Bob (Pat) of Ferndale, Washington, Barry passed away January 2000 (Sandra) of Mt. Vernon, Washington. Her daughters Susie (Roger) Riley of Rexburg, Idaho, Debbie (Cam) Cook, and Barbie (Lee) Stringam of Magrath. Lily is survived by her two sisters Bess Bussenius, of 100 Mile House, B.C., and Doras MacDougall, of Kamloops, B.C. She is also survived by her sister-in-law, Marjorie Dickson of Toronto, ON, and brother-in-law Terry (Kim) James of Queensland, Australia.
To say that Lily appreciated our local medical services would be an understatement. She was so grateful for the unwavering care provided. The family extends a very special and heartfelt thank you to Dr. Ken Dahl and his able staff over the years, also to the recent care she received in the Raymond and Lethbridge hospitals.
Friends may meet the family at The Church of Jesus Christ of Latter-day Saints, Garden Place Chapel, Magrath, Alberta on Tuesday, December 4th, 2012 from 7:00-8:00 p.m. or from 10:00-10:45 a.m. prior to the service.
The Funeral Service will be held at The Church of Jesus Christ of Latter-day Saints, Garden Place Chapel, on Wednesday, December 5th, 2012 at 11:00 a.m. Interment in the Magrath Cemetery.
E-mail your condolences to: legacyfh@telus.net
Funeral arrangements entrusted to Berry Gorham of Legacy.
Legacy Funeral Homes Ltd.
P.O. Box 208
Cardston, Alberta T0K 0K0
Phone (403) 653-3222
Fax (403) 653-3677
legacyfh@telus.net