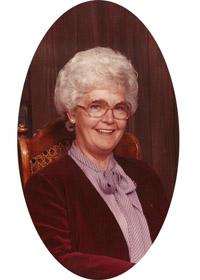 It is with both sadness and gentle acceptance that we acknowledge the passing of our mother, grandmother, great grandmother, and friend, Ruby Lewis, on December 2, 2012 at the age of 93. Mom passed away at St. Therese Villa in Lethbridge.
Born in Acme, Alberta on May 28, 1919, Ruby was a daughter to Tom and Ella Davis and sister to Ralph, Orville, Elwood and Bruce, all deceased. She was raised on the Davis farm, where the family lived until 1935. She learned to cook and bake for large crews during harvest time, tasks she enjoyed and learned well as she was the best at both! When she was 16, the Davis’s moved to the Oklahoma District west of Innisfail and Moms youngest brother Bruce became good friends with the Lewis family. Destiny played its role and in February, 1941 Mom married Ernest Robert Lewis. The happy couple moved to Lethbridge and together they raised four children.
After Dads passing in December 1977, Mom met Jim Hagan a companion with whom she enjoyed many wonderful times. They travelled to Europe, Hawaii, Alaska, and beyond, and it was during this time that Mom developed a love for the game of golf. She and Jim spent countless happy hours golfing throughout Alberta and the U.S.
Mom will remain always in the hearts and souls of her beloved children, Barrie (Pat), Sherri, Robert (Jody) and Rhae Ann (Al); grandchildren Trevor (Carmen), Dhannie Marie (Jason),
Brynne (Chris), Mike (Alexis), Christine (Jason) Cody and Jaime; and great-children Kirsten, Wyatt, Tate, Ella, Brooklyn, Madison, William and Wyatt. Aunt Ruby will live on in the memories of her two favourite nephews, Ray (Helen) Davis of Rutland, B. C. and Larry (Judy) Davis of Innisfail, Alberta.
A Service of Remembrance will take place at CORNERSTONE FUNERAL HOME, 2800 Mayor Magrath Drive South, Lethbridge, AB, on Saturday, December 8th, 2012 at 11:00 A.M. with Reverend Bob Wallace officiating. Flowers are graciously declined, however, if people so wish, donations may be made to the Alzheimer’s Society of Lethbridge, #402 – 740 – 4th Avenue South T1J 0N9.
Honoured to Serve
Cornerstone Funeral Home & Crematorium
2800 Mayor Magrath Drive South
Lethbridge, Alberta T1K 7B1
Telephone ~ (403) 381-7777
Fax ~ (403) 381-3128
Toll Free ~ 1-(888)-381-7778
care@cornerstonefh.ca