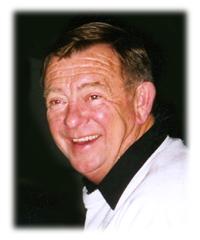 1934 ~ 2012
The family of Roy Edwin Loney, sadly announce his passing after a
brief illness at the Bow Island Health Centre on Sunday, December 23,
2012, at the age of 78 years. Roy was born in Olds, Alberta, a son of
the late Ira and Anna (Petersen) Loney. Roy retired from the Green
Power John Deere dealership in Burdett where he was a successful
salesman for more than 20 years. He and business partner, Chris
Christopherson also owned a Bow Island butcher shop, C& L Lockers, for
nearly 20 years. He worked for the Jenkins grocery chain before
opening the butcher shop. Roy was very active and passionate about
his community, always among the first people to volunteer. He served
in the following capacities: on Town Council; as Fire Chief and member
of the volunteer fire department; as local host chairman during the
1975 Canada Winter Games; on the regional planning commission; as a
hockey coach; on the July 1st committee and in various business and
merchant groups. Roy was a long-time member of the Lions Club, Elks
Club, Royal Canadian Legion and the Bow Island Golf Club. He was very
proud of his sons’ accomplishments and passed on a lifelong love of
hockey to all his children and grandchildren. A great-grandson,
Jonis, continues the family tradition. Roy is survived by his loving
wife, Jeanette (Treiber); sons, Brett (Karen) of Halifax; Todd
(Jodi) of Fort McMurray and Troy (Aafke) of Pittsburgh. He will be
fondly remembered by his grandchildren: Kier and Cale (Amy); Jade
and Josh; Reed, Ty, Clint and Aafke. He is also survived by his
brothers, Lawrence (Joan) of Olds and Dale of Calgary. He was
predeceased by his sister, Joyce (Terry). For those wishing to
attend, the burial will take place (prior to the funeral) at the Bow
Island Cemetery on Friday, December 28, 2012, at 11:00 A.M. A
Celebration of Roy’s life will be held at St. Peter Lutheran Church,
758 – 8 Street S.E., Medicine Hat on Friday, December 28, 2012, at
2:00 P.M. with Pastor Mack de Waal officiating. The family would like
to thank Dr. Lynn Edwards and the staff of the Bow Island Health
Centre for their kindness and care over the last few years. Memorial
donations in Roy’s name may be made directly to the Bow Island Health
Care Centre, Bag 3990, 938 Centre Street, Bow Island, Alberta T0K
0G0. (Condolences may be expressed by visiting
www.cooksouthland.com)