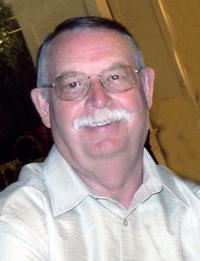 GLENN BETTS LYONS, beloved husband of Sharlene Lyons of Lethbridge, passed away suddenly at Chinook Regional Hospital on December 23rd, 2012, at the age of 65 years. He is the loving father of: Trent Lyons, Tiffany (Mike) Hendry and Brad Lyons; Grandfather of: Blake, Aubrey, Kennedy and Kinsley Lyons, Nicole (Andrew) Maclean, Austin, Ciara and Brock Hendry, Zachary and Hunter Lyons; Great-Grandfather of Scarlette Maclean.
He is also survived by his siblings: Mary Louise Mortensen (Tom), Joan Stephenson, Doreen Hatton (Lynn), George Lyons (Eeva), Joseph Lyons (Carolyn), Neville Lyons (Marja-Leena) and Lorraine Strange (Ted); Brothers and Sisters-in-law, Cheryl Lyons, Bonnie Mueller, Karl and Carla Samuels, DeForest and Margaret Currie and numerous nieces, nephews and friends.
He was predeceased by his parents, George and Ilene Lyons, sisters, Rosa, Winnie, Reatha, Jeanetta, and his best friend and brother David; also, his father and mother-in-law, Walter and Reta Currie.
Glenn was born in Lethbridge on June 18, 1947. He was the youngest of 13 children born to George and Ilene Lyons. Glenn grew up and attended school in Lethbridge. He worked at numerous gas stations during his youth. While attending college, Glenn married his high school sweetheart Sharlene. They had their first two children in Lethbridge before moving to Calgary so Glenn could learn the plumbing trade from his brother George. The family then moved back to Lethbridge where their third child was born. Glenn was employed by Sears, working in various departments within the store for the next 10+ years. He then worked for Dave Lyons Tire, Fountain Tire and eventually Kirks Tire. Glenn also owned and operated his own mobile tire business, G.L. Tire Service. In 2004 Glenn retired due to health issues but kept himself busy doing handyman jobs for family and friends. Glenn was a faithful member of the L.D.S. church and loved to serve any way he could. He especially enjoyed his time in the Student Ward Bishopric and working at the Family History Library. Glenn’s favorite things were old cars, road trips with his wife and family, fast food and his dog Jake. Glenn will be greatly missed by everyone that knew him. We love you Dad.
Family and friends are invited to meet the family from 10:00 – 10:45 a.m. on Wednesday, January 2, 2013 at The Church of Jesus Christ of Latter-day Saints, LETHBRIDGE WEST STAKE CENTRE, 560 Highlands Blvd. West, Lethbridge. The Funeral Service will follow at 11:00 a.m.
Memorial donations may be made to S.T.A.R.S., P.O. Box 570, 1441 Aviation Park NE, Calgary, AB T2E 8M7
Christensen Salmon Generations Funeral Home Ltd.
703-13 Street North
Lethbridge, AB T1H 2T2
Phone: (403) 382-3601
Fax: (403) 320-1492
Email: condolences@generationsfh.ca
Sign guest book: www.generationsfh.ca