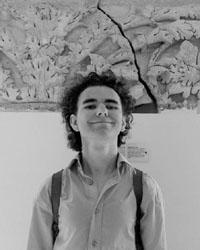 February 21, 1994
December 28, 2012
After a brave 18-year struggle with a rare vascular disease our beloved son and brother, Hunter Jones Martin, left us on Friday, December 28th.
Hunter was an extraordinary young man. When he could, he loved to play soccer and tennis, to snowboard and to “hang” with friends. He was a gourmet who loved urban life. Most importantly, Hunter loved to have fun and to laugh. His eloquent wit and deep insights into the human condition were legendary among his many friends, peers and adults alike.
Hunter loved to write and had just applied to the Capilano University Creative Writing program. He often joked that the suffering that he had to endure throughout much of his life was a purification process, designed to assist him to distill the meaning of life through the written word. His writings were true. For example, in November 2010, following a stroke in August of that year and when he was just 16, he wrote this poem in response to a high school English assignment to describe himself from the perspective of his doctor:

Hunter grew up in West Vancouver and attended Collingwood School, Waldorf School and West Vancouver Secondary. Over the years Hunter grew to know, love and respect his many doctors at B.C. Children’s Hospital, the National Institute of Health, Bethesda, and Vancouver General Hospital. Lucinda Jones, David Martin and his sisters Azja and Savanna Jones Martin are deeply appreciative for the kindness and generosity of spirit shown to Hunter by all of his dedicated coaches, teachers, doctors and nurses. They also thank him for all of the love and joy he shared with them each and every day of his short life. His manly wink and glowing heart will never be forgotten.
In 2008 B.C. Children’s Hospital geneticists Doctors Neal Boerkoel and Milan Patel approached Hunter and his parents to assist them in forming a foundation whose mission would be to assist children who suffer from rare, often undiagnosed, diseases and whose needs are not fully met by government or the pharmaceutical industry. Hunter immediately embraced the idea and thereafter assisted in the creation of the Rare Disease Foundation which today provides much needed assistance to children suffering as Hunter did. If desired, donations in tribute to Hunter and to his commitment to others may be made by mail to the Rare Disease Foundation, 4500 Oak Street, Room C234, Vancouver, British Columbia, V6H 3N1 or, electronically, through the Foundation website at www.rarediseasefoundation.org