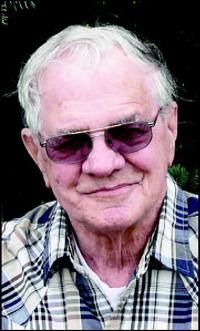 1938 – 2013
Edward Bernard Bolen, beloved husband of Delores Bolen, passed away
peacefully in Taber on Tuesday, January 8, 2013 at the age of 75 years.
Relatives and friends are invited to Prayers at the Southland Funeral
Chapel, 5006 – 48 Avenue, Taber on Friday, January 11, 2013 at 7:00 P.M.
The Funeral Mass will be celebrated at St. Augustine’s Catholic Church,
5009 – 48 Avenue, Taber on Saturday, January 12, 2013 at 10:30 A.M with
Reverend Vincent TuanHa Celebrant. A private family burial to follow at the
Taber Memorial Garden. Condolences may be forwarded by visiting our website
at www.southlandfuneral.com.
Along with his wife of fifty two years, Delores, he leaves behind his four
children Denise (Jerry) Heerink of Vauxhall and their children Jordan,
Jelisa (Rusty) and Janelle; Doris (Brad) Odland of Medicine Hat and their
children Lexi (Devin) and her son Jaxen, Larissa (Jeremey); Ivan Bolen of
Hays; Deanna (Rob) Kolodychuk of Edmonton and their children Damon and
Logan. He is also survived by his siblings Helen (Al) Zadnik, Harold Bolen,
Leonard (Marie) Bolen, Verna (Butch) Clark, Brian (Maureen) Bolen, Della
(Neil) Goruk and Patty (Peter) Valgardson; brother-in-law Dale (Helen)
Campbell as well as many nieces and nephews.
He was predeceased by his parents Andrew and Angeline Bolen; father and
mother-in-law Richard and Louise Campbell.
Edward was born in Bracken, Saskatchewan on January 6, 1938. He lived in
Masefield, Saskatchewan until moving to Hays in April of 1953. He worked for
the PFRA, BRID and Old Dutch before retiring in 1997. He will be lovingly
remembered by his family and friends.
If friends so desire, memorial tributes in Edward’s name may be made
directly to a charity of one’s personal choosing.
Arrangements in care of Southland Funeral Chapel, Taber. Telephone: (403)
223-8778.