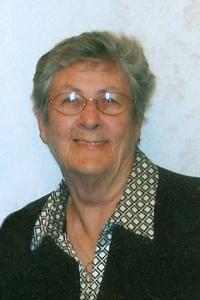 MRS. EMILY SCHAWALDER of Lethbridge, beloved wife of the late Mr. George Schawalder passed away suddenly at the Edith Cavell Health Centre on Tuesday, January 8, 2013 at the age of 85 years.
Emily was born on September 12, 1927 in Pleaseantdale, SK to James and Annie Shirran. Growing up Emily was always on the go and soon started traveling. On one of her travels she made her way to Fernie, BC where she met George. They travelled from Fernie to Manitoba where they were married on November 27, 1953. Shortly after marring they started having a family, four children in all. Through the years the family moved living in different towns in the Western Provinces finally settling in Lethbridge in 1980.
Throughout her life Emily enjoyed camping dancing and of course cooking. Her greatest joy was spending time with her four grandsons. Emily always had an open door policy for her family and friends.
Emily is survived by her daughters Sandra and Debra; sons Ken (Cheryl) and Tim (Cindy); grandchildren Kris, Craig, Michael and Dylan; sisters-in-law Bea, Audrey, Chris (David) and Diane; brother-in-law Roman (Glenda); as well as numerous nieces, nephews and their families.
Besides her beloved husband George, Emily was predeceased by her parents James and Annie Shirran, siblings Alex, Elizabeth, Jim, John and Nellie; sister-in-law Elsie, and brothers-in-law Jack and Leonard.
Family and friends are invited to pay their respects between 2:00 pm and 2:45 pm followed by a Funeral Service held at 3:00 pm on Saturday, January 12, 2013 at MARTIN BROTHERS RIVERVIEW CHAPEL, 610 – 4 Street South, Lethbridge with Major Brian Beveridge officiating.
In lieu of flowers, memorial donations may be made to the Heart and Stroke Foundation of Alberta, Box 2211, Lethbridge, AB T1J 4K7 or to the Parkinson’s Society of Southern Alberta, 1254 – 3 Ave South, Lethbridge, AB T1J 0J9.
Send condolences at www.mbfunerals.com.
Martin Bros. Funeral Chapels Ltd.
610 – 4 Street South
Lethbridge, AB T1J 4P3
Phone: (403)328-2361 Fax: (403)382-3623
Toll Free: 1-800-382-2901
www.mbfunerals.com