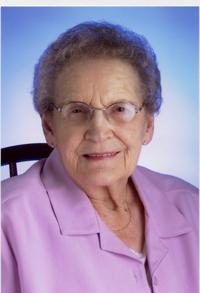 Passed away in Raymond on Sunday, January 20th 2013. LOYIA WILLIAMS HEGGIE at the age of 89 years, beloved wife of the late Douglas Fawns Heggie of Raymond.
Loyia was born in Cardston on December 8, 1923 to Ves and Myrtle Williams. She received her education in Glenwood and Raymond. She married Doug Heggie on October 10th, 1941. They raised their family of five children mostly in the Raymond, Rosemary and Milk River areas. Loyia was an excellent cook which not only benefited her family but gave her an opportunity for extra income as she cooked for thrashing crews in her early years and had her own baking business in her later years selling spudnuts, butterhorns and other delicious things. She also enjoyed gardening and spending time with her family. Loyia was an active member of The Church of Jesus Christ of Latter-day Saints. She filled many calls to serve over the years, and one of her most memorable was working in the Cardston Alberta Temple.
Loyia is survived by four of her children: Doreen (Rob) Galicz of Brooks, Jack (Jeanne) Heggie of Raymond, Joan (Dennis) Dick of Wetaskiwin, Sandra (Bruce) Francis of Taber, and her son-in-law Ron Treleaven of Calgary; 24 grandchildren; 57 great grandchildren and two sisters, Beth Kesler and Vesta Anderson both of Raymond.
Besides her husband, Doug; she was predeceased by her parents Ves and Myrtle Williams; two sisters, Mary Maude Williams and Hortense Roberts; her daughter Shirley Treleaven and her great grandson Garhett Marshall Treleaven all of whom she dearly loved.
Friends may meet the family on Friday evening, January 25, 2013 from 7:00 to 8:00 p.m. at the LDS – Raymond Stake Centre, and prior to the funeral service on Saturday from 10:00 to 10:45 a.m.
The Funeral Service will be held on Saturday, January 26, 2013 at 11:00 a.m. at The Church of Jesus Christ of Latter-day Saints, RAYMOND STAKE CENTRE, 2 N, 200 W, Raymond at 11:00 a.m, with Bishop Ron McMullin officiating.
Interment to follow in the Temple Hill Cemetery, Raymond.
Christensen Salmon Generations Funeral Home Ltd.
703-13 Street North
Lethbridge, AB T1H 2T2
Phone: (403) 382-3601
Fax: (403) 320-1492
Email: condolences@generationsfh.ca
Sign guest book: www.generationsfh.ca