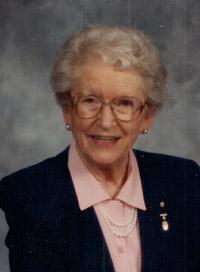 January 8th, 1916 – January 16th, 2013
Reta Ethel Koch, of Nanton, widow of the late Albert Koch passed away, at the age of 97, Wednesday, January 16 with her family at her side. Reta was born and educated at Enchant, Alberta. She attended Calgary Normal School and taught at Badger Lake, Rocky Rapids, Dovercourt, Enchant and Herrington before marrying Alberta Koch and moving to Nanton where they farmed until retiring to Nanton in 1971. She was predeceased by her parents, Beatrice and William Orr, her siblings Lucille (1921), Ronald (1938) and Betty Davidson (2002) and her husband, Albert (1983). She is survived by her daughter Sheila and Bob Lake, her grandchildren Tracey (Tom) Brewster, Rob (Danielle) Lake and her great grandchildren, Tiana and Mitchell Lake, Brice Robins – Lake and Brinn Robins – Lake and Derek Brewster. The family extend thanks to Dr. Tenove, the caring staff of the Silver Willow Lodge and staff of unit 81 at the Foothills Hospital. A Celebration of Reta’s life will be held at the Nanton – Parkland United Church Saturday, January 26th, 2013 at 2:00 p.m. Flowers are gratefully declined. If desired, memorial donations may be made in Reta’s memory to the charity of your choice. To email condolences please visit www.snodgrassfuneralhomes.com . Arrangements in care of Snodgrass Funeral Homes Ltd, High River. (403-652-2222)